GUILFORD, CT – July 12, 2016 – American Cruise Lines (www.americancruiselines.com) announced today the successful launching of its newest ship, American Constellation. The new cruise ship, being designed and built by Chesapeake Shipbuilding in Salisbury, Maryland, launched Saturday under perfect conditions. Immediately after being launched into the calm waters of the Wicomico River, tugboats maneuvered the cruise ship into Chesapeake Shipbuilding’s East Outfitting Basin where the upper decks will be added and outfitting will be completed. 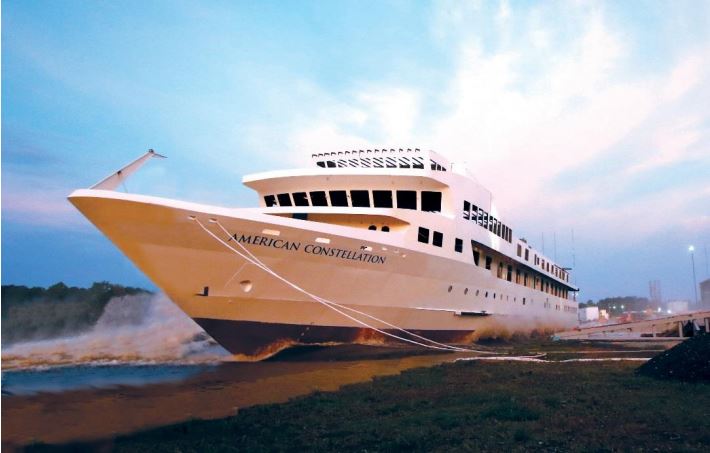 The launching comes just a few weeks after the joining of the major two hull sections. With the installation of the upper decks next, the new cruise ship will come together quickly, and upon completion will bring American Cruise Lines’ fleet up to nine ships. The new ship will have a capacity of 170 passengers and is scheduled to begin cruises in the spring of 2017. American Constellation will offer 10-night cruises on a new Grand New England itinerary sailing
round-trip from Boston, MA, after sailing two 7-night cruises on the Chesapeake Bay round-trip from Baltimore, MD.

Read more about the American Constellation.