Cruising the river, you’ll enjoy big cities and small river towns. Some you’ve heard of and others are a new adventure. In our Destination Spotlight series, we’ll help you get acquainted with these new destinations to prepare you for your cruise. Today we’re highlighting The Dalles, Oregon.

The current site of The Dalles was used as a Native American trading location for at least 10,000 years. In the region was a long rapid in the Columbia River, dangerous because of the columnar basalt rocks in the river. The French-Canadian fur traders who frequented the region referred to the rapids as “Grand Dalles.”

When people began taking wagons over the Oregon Trail, they had to stop in The Dalles. The wagons couldn’t continue any further west. From The Dalles, people who wanted to continue to Fort Vancouver had to raft the Columbia River.  A port office was established in 1851, the city was incorporated in 1857, and officially named The Dalles in 1860.

Construction on The Dalles Dam began in 1952 and took 5 years to complete. The rapids were submerged. Almost all Columbia River cruises transit the lock at The Dalles Dam. On our 2019 inaugural cruise aboard the American Song, I filmed the opening of the lock. I expected squeaky loud metal noises (like something from Star Wars), and was somewhat disappointed with how noiseless the opening of the lock was. However, the process of the boat getting lined up, waiting for the green light, and getting in the lock to raise up was really fun!

When Your Cruise Stops in The Dalles 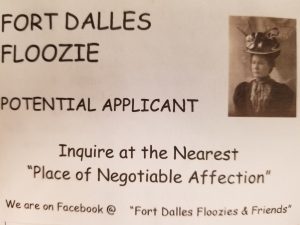 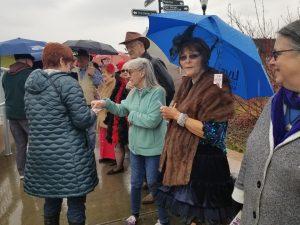 Everyone who steps off the boat in The Dalles is greeted by the Fort Dalles Floozies! Everyone is handed a map of downtown, and the women are handed a “Fort Dalles Floozie Potential Applicant” card. On the back it explains that these volunteers promote and educate visitors and residents about the history of the region. But their costume and accessories make the greeting fun and whimsical. The map they provide of downtown is fantastic – showing how to get to all the retail shops, winery and breweries, health stores, coffee stops and more. And the dock is on the map, so you can find your way back! Downtown The Dalles is also covered in beautiful murals, identified on the map by a star. If you’d rather not walk the 3 blocks to downtown (or the 12 blocks to Sunshine Mill), there are even three phone numbers for local taxi services on the map! Give them a call and head down to have some local fun.

There are potential shore excursions to enjoy in The Dalles, as well as neighboring cities like Hood River, OR and Goldendale, WA. 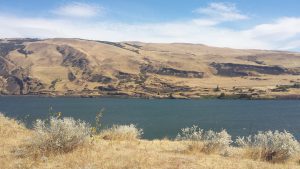 I love the Columbia Gorge Discovery Center & Museum. It’s set up in two parts: to the right is the modern history of The Dalles, pioneers and fur traders and the like. This is also where the kids area is, and its great fun to play dress up and pose in front of the covered wagon – it’s even funnier for adults! Beginning with Lewis and Clark, it continues through the development of the town as a stop on the Oregon Trail, and county history as well.

The left half of the museum is the natural history of the region, including flora and fauna. The Ice Age exhibit includes a life-size 13-foot Columbian mammoth! The Ice Age is important to the history of the area, because it contributed to the creation of the Columbia River Gorge. The next exhibit focuses on the 10,000 years of continuous Native history, making the gorge one of the oldest areas supporting human life in the Western hemisphere.

Outdoors is a path that leads to the beautiful view of the Columbia River pictured to the right. The 50 acres surrounding the Center are a habitat for natural wildlife and plants. There is a paved path with scenic views. The Native Plant Restoration project features more than 90 indigenous plant species.

Fort Dalles was built in 1850 by the United States Army in the Oregon Territory, originally under the name Camp Drum, to deal with ongoing wars with Native Americans. It was renamed Fort Dalles in 1853. Today, the Fort Dalles Museum is the old surgeon’s quarters, built in 1856 – the only remaining officer’s house from that period. The museum attempts to show daily life in Oregon from the mid 1800s to the early 20th century. They have an expansive exhibit of pioneer and military artifacts in two period homes, as well as antique wagons.

The original Wasco County stretched from the Cascades to the Rockies, and its courthouse was completed in 1859, after Oregon became a state. It housed the Sheriff and Clerk’s offices, as well as three jail cells on the first floor, and a courtroom for church services and public meetings on the second floor. The building continues to be preserved, despite being moved six times.

WAAAM (Western Antique Aeroplane and Automobile Museum) has one of the largest collections of operational antique aeroplanes and automobiles in the country! Whether you’d get more excited about the 1917 Curtiss JN-4D Jenny, or the 1917 Detroit Electric, or any of the Harley Davidsons or Indians in the motorcycle collection as well, you’ll have a great time. There are even gliders, tractors, and military vehicles! If you like things that go vroom, this is the place for you. 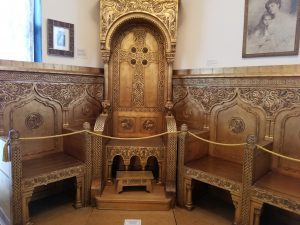 Just across the Columbia River, in Southern Washington, lies the Maryhill Museum of Art. The history of this place is as fascinating as the treasures it holds inside. Sam Hill (a famous name around the Gorge) originally bought the 5300 acres along the river to establish a Quaker farming group. His plan for the town included a store, post office, church, inn, stable and blacksmith’s shop. He bought the land in 1907, and in 1914, began working on his mansion, which would house his family. The region is difficult to work in, and was too remote. Construction was forced to stop in 1917. A friend in Paris suggested turning the mansion into a museum, and helped to acquire art, including more than 80 works by Auguste Rodin. In 1926, the museum was dedicated by Queen Marie of Romania, who also donated much to the museum. The Rodin and Queen Marie exhibits are on permanent display at the museum, as well as the Indigenous Peoples of North America artifacts and Orthodox Icons.

Cruises that Visit The Dalles