Cruising the river, you’ll enjoy big cities and small river towns. Some you’ve heard of and others are a new adventure. In our Destination Spotlight series, we’ll help you get acquainted with these new destinations to prepare you for your cruise. Today we’re highlighting the river town of Sturgeon Bay, Wisconsin.

Sitting at the end of Sturgeon Bay on the Door Peninsula sits the city of Sturgeon Bay. Originally inhabited by the Ho-Chunk and Menominee indigenous peoples, the territory was ceded to the United States in 1836 by treaty. The town was established with the first house built on the waterfront in 1850. Over the next decade, more than 200 residents would move in. Sturgeon Bay quickly became the port from which local quarries shipped their limestone. However, ships found the Ports des Morts Strait hazardous (literally “Death’s Door Strait”). In 1880, a canal was built from the Sturgeon Bay to Lake Michigan, which boosted the town of Sturgeon Bay’s popularity as a center for maritime traffic. Their shipbuilding efforts became part of the war effort in both world wars in the 20th century.

When Your River Cruise Stops in Sturgeon Bay

If your cruise ship has stopped in Sturgeon Bay overnight, be sure to get up early to catch the sunrise at Sherwood Point Lighthouse. Constructed in 1883, it directed ships coming from Green Bay. There are also two other lighthouses to visit in Sturgeon Bay, each unique and still standing since the 19th century.

Once named the ‘Best Small Museum in the Midwest’ by the Chicago Tribune, Door County Historical Museum is home to a display of the original Sturgeon Bay fire company, including antique fire engines and other turn-of-the-century vehicles. There are also displays on folk art, war history, and the local cherry and apple orchards that drove much of the economy on the peninsula.

Experience Sturgeon Bay’s living history at the Heritage Village at Big Creek. They represent rural Door County from 1880 to 1910.  There is Vignes School, a single room school that taught children ages 4 to 14; the Greene General Store, which was the center of communal life in the town; Petersen Granary and Blacksmith Shop was essential, since wheat was the major crop in Wisconsin at the turn of the century, and so much more.

The Door County Maritime Museum has a popular exhibit on the shipwrecks of Door County. The Great Lakes has a long history of shipwrecks, especially around Door County. The exhibit has recovered artifacts, underwater footage and a discussion on the tools and technology used for underwater archaeology and wreck hunting.  There is also display covering the history of underwater diving. For the most interactive fun, step into the actual wheelhouse of the Elba, a 1907 freighter. The pilothouse will take you thru a simulation of the Sturgeon Bay Canal – watch out for fog and bridges as you captain the ship into port. 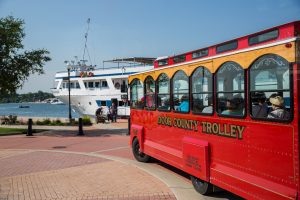 Door County Trolley provides tours of the peninsula, including themed guided tours, like “Wine, Spirits & Brew,” “Bloody Mary and Brunch” or “Lighthouse Tour.” Or there’s always the basic scenic tour to show off the highlights of the peninsula.

The Grande Caribe and Grande Mariner visit Sturgeon Bay every year. Whether you choose the optional onboard excursions, or plan your own fun, you’ll enjoy your visit to Sturgeon Bay!