Beginning along the Maine coastline, you’ll experience the historic shipbuilding that set this region apart, as well as walk the national parks highlighting the natural wonders of the area. The picturesque landscapes of Canada will transport you to a different time as you visit the Victorian-style Montreal, or search for Green Gables in Charlottetown, or view the artifacts of the Titanic wreckage in Halifax at the Maritime Museum of the Atlantic.

1Embark in Portland, ME
Established in 1632 by the British, Portland grew quickly from its fishing roots to become popular with the largest shipping and trading companies. Fishing ships still reside in the harbor and Victorian-era buildings line cobblestone streets. The arts carry the vibrant energy of the modern city.

2Bar Harbor, ME
This enticing village sits on the east side of Mt. Desert Island. Bar Harbor has been a destination for relaxation and outdoor exploration since the 19th century. Bar Harbor borders the Acadia National Park, famed for its beauty. You can dive deep into local history and culture at the Abbe Museum, detailing the Wabanaki tribe indigenous to the region.

3Lunenburg, NS
Est 1753. Pictured right. Lunenburg was the first British Colonial settlement in Nova Scotia. The waterfront is home to the Fisheries Museum of the Atlantic, home to a replica of Canada’s Bluenose.

4Halifax, NS
Halifax is the capital of Nova Scotia, and has long been the symbol of the Canadian Maritimes. You can visit the Maritime Museum of the Atlantic, or stroll down the Bohemian Spring Garden Road neighborhood. The Halifax Citadel National Historic Site is a 19th century fort with beautiful views of downtown Halifax. The Citadel is home to two historic regiments – the 78th Highlanders and the Royal Artillery.

5Charlottetown, PEI
Ever read Lacy Maud Montgomery’s novel, Anne of Green Gables? Prince Edward Island is world famous for its sandy beaches and historic/literary sites. You can visit Green Gables, the farmhouse featured in the novel. For the history of PEI, tour the exhibits at Founders Hall.

7Iles de la Madeleine, QC
The Iles de la Madeleine is an archipelago with seven inhabited islands, six of which are connected by the 55-mile-long Route 199. The name of the islands was first written on an early map by Jacques Cartier around 1536, although settlements didn’t begin until 1650. La Grave is on Amherst Island, home of the archipelago’s largest forest. Great for hiking, shopping, and cultural centers.

8Gaspe & Perce, QC
Gaspe is where Jacques Cartier first claimed the land for France in 1534, marking it as the ‘Birthplace of Canada.’ Gaspe Bay is the 2nd largest natural bay in the world. We’ll take a train down the coast to the village of Perce, which borders Perce Rock. You’ll be lining up to take photos of this stunning natural feature.

9Baie-Comeau, QC
The first thing you may notice as we approach the archipelago are the harbor seals and seabirds. Take a walk along the sandy beach, between the clear waters and forests. Take the guided walking tour through Boise de la Point Saint-Gilles, a bird conservation and wildlife refuge.

10Saguenay Fjord, QC
The Saguenay Fjord is a stunning stretch of scenery! Whale watching is popular with the St. Lawrence River meets the fjord. The small villages along the way are timeless. Above the cliff at Cap Trinite stands a 33-foot statue of the Virgin Mary.

11Quebec City, QC
Quebec City is an amazing city to behold. The streets of Old Quebec show off the architectural differences of the British and French influence, now filled with fragrant gardens and chic boutiques. Take the Old Quebec Walking Tour, and catch a glimpse of the Montmorency Falls - 275 feet high and 150 feet across (100 feet higher than Niagara Falls!).

12Montreal, QC
Montreal is the most bilingual city in North America. Practice your French, or just enjoy those who can speak it more fluently than you. A walking tour of Old Montreal will show off its charm as you walk along cobblestone streets past alleyways and the waterfront district. This is one of the oldest cities in North America!

13Day of River Cruising
Relax! Take today to recover from so much busyness, and just enjoy the ship and the company of your new friends.

14Clayton, NY
As we cruise through the 1000 Islands region, stop at historic Clayton. Learn about the yachting history of the region at the Clayton Antique Boat Museum. The entire downtown district is 'historic,' with buildings dating back to the late 1800s.

15Disembark in Toronto, ON
Today we'll say goodbye in the beautiful city of Toronto. Ask our agents about extending your stay with a post-cruise hotel and city tour of Toronto. 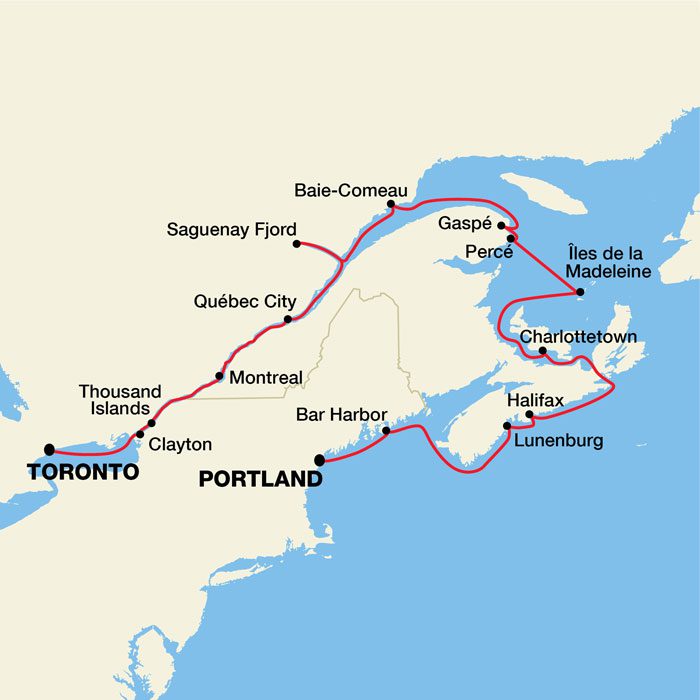