Experience the South in a new way!!  The seaboard of Georgia & South Carolina harbors a wealth of wildlife habitats and a fascinating cultural heritage.  Here, the sea islands hug the mainland, offering undulating dunes, meadows, marshes, and forests that teem with birdlife and other creatures, as well as an intricate web of waterways that beg to be explored.  Discover these stunning wilderness areas with our naturalists, and delve into the complex history of the South in charming coastal cities and on barrier islands where the West African-influenced culture of the Gullah-Geechee people continue today.

1Jacksonville, FL / Embark
Arrive in Jacksonville and transfer to Fernandina Beach, where we embark Nat Geo Sea Lion. Meet the crew and our team of naturalists, and set sail toward St. Mary's River.

2Cumberland Island, GA
This morning, we cruise north into Georgia, following the Intracoastal Waterway to Cumberland Island, a designated National Seashore of wild beaches, vast marshes, and intriguing history. Inhabited over the centuries by Native Americans, enslaved people, missionaries, and the famous Carnegie family, the island offers insight into life and culture of the southeastern seaboard over the centuries. Visit the haunting ruins of the Carnegie Dungeness estate, abandoned after a fire in 1959. Then set foot to discover feral horses and other fascinating flora and fauna amid pine forests and dunes.

4Sapelo Island / Ossabaw Island
Georgia's fourth largest barrier island, Sapelo Island protects the fragile habitat of the Altamaha River Estuary and harbors rich wildlife. With its 28 transitional habitat areas, the island is an important piece of National Estuarine Research Reserve System. While now undisturbed and returned to nature, the island has been inhabited for 4,500 years, from prehistoric indigenous people to Spanish missionaries, through the dark years of slavery and on to the freedman and women who established the community of Hog Hammock still in existence today.

5Savannah, GA
Arrive in stately Savannah, Georgia's oldest city. We'll explore the city on foot, starting off with a stroll among the Spanish moss-draped trees of Forsyth Park, where we may see northern parula warblers amid the hanging moss. Stop by the First African Baptist Church, the oldest African-American congregation in the country, founded in 1773. Savannah's 22 historic squares each have their own interesting story.

6Daufuskie Island / Turtle Island
Go ashore at Daufuskie Island, a hub of Gullah culture and language. Some residents speak Gullah to this day. Get immersed in the mystique of the island, soaking up the local culture and learning about the rich spiritual traditions of its residents, who paint their trim "heaven blue" to ward off evil spirits. After lunch, continue to nearby Turtle Island. Comprised of coastal dunes, salt marsh, and upland southern pine habitat, the island has been designated as an Important Bird Area. The wide variety of species that pass through here include endangered least tern, Wilson's and piping plovers, and black skimmers.

7Charleston, SC
Founded in 1670, Charleston is steeped in history and charm, from its cobblestoned, lantern lit streets to its romantic mansions. On our way into the city we'll cruise past Fort Sumter, where the first shots of the Civil War were fired. Set out on a walking tour of this picturesque city, strolling through Rainbow Row, where historic Georgian homes are painted bright, lavish colors. Continue to lovely White Point Garden at the southern tip of the peninsula on which Charleston sits. Here, meander past cannons and other relics of the Civil War and enjoy expansive views of Fort Sumter and the Charleston Harbor.

8Charleston / Disembark
After breakfast this morning, disembark and transfer to the Charleston airport for your flight home. 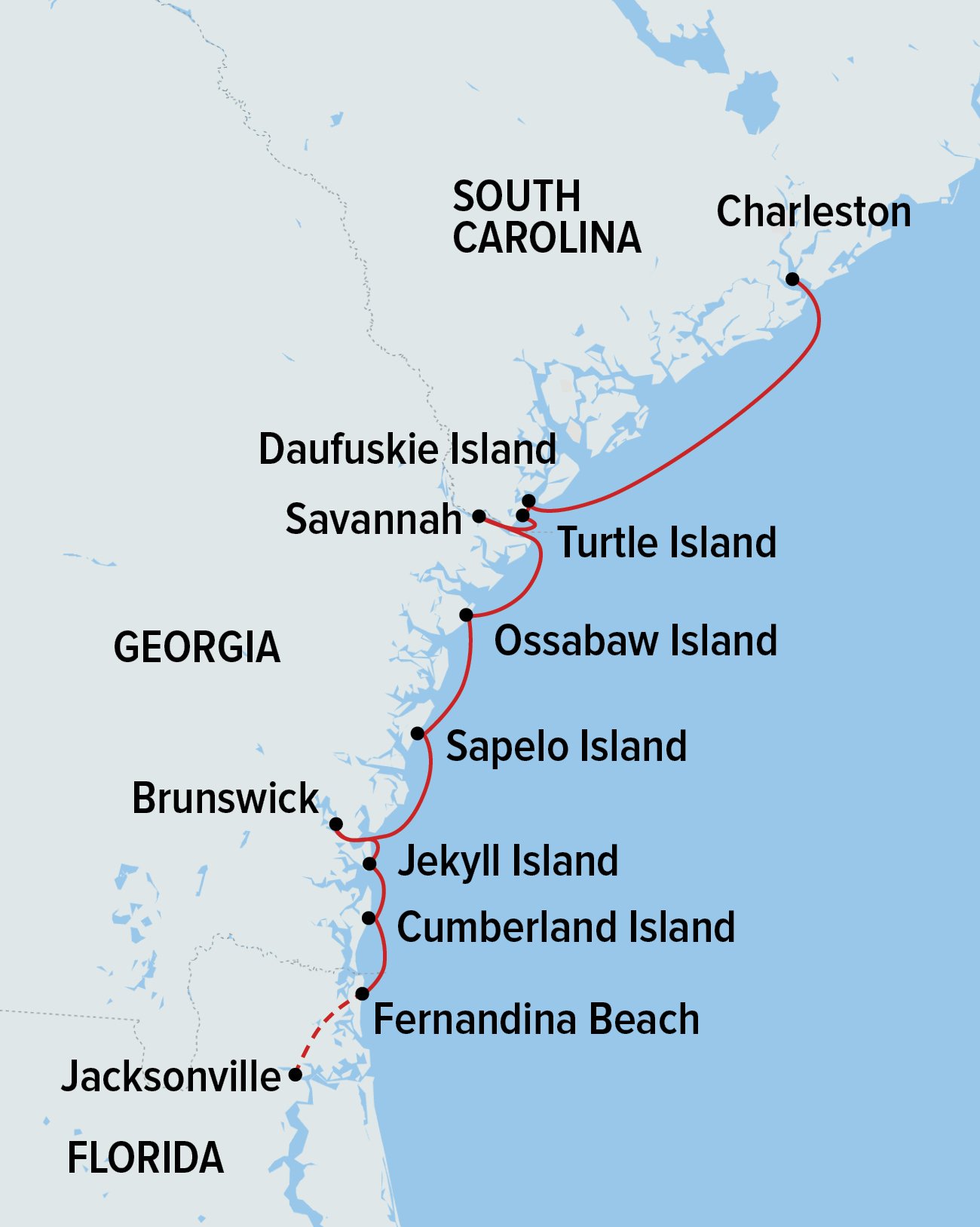