See it all with this cruise- New England AND French Canada! Historic cities and breathtaking landscapes while traveling aboard the modern Victory II.

1Embark in Montreal, QB
Settle into your stateroom before meeting your fellow cruisers at the Welcome Reception and dinner - house wines and cocktails included.

2Montreal
The St. Lawrence Seaway abuts the land where old Europe meets contemporary design in Montreal. Feel the pulse of this diverse and vibrant city. Take our city tour of Montreal that includes Mount Royal Overlook, underground city, and the medieval ambiance of the Gothic Revival Notre-Dame Basillica.

6Charlottetown, PEI
Prince Edward Island is Canada's smallest province, but it's big on charm! Home to the Green Gables farmstead, you'll be transported thru space and time (via your imaginations, of course) to Anne's world, including Lovers' Lane, the haunted woods, and the white shores! You'll also take in the stunning beauty of the island along the North Shore and Cavendish Bay.

7Sailing the Strait of Corso

8Halifax, NS
Halifax was settled by the British because of the amazing supply of cod in the harbor. Halifax's harbor is the second-largest ice-free harbor in the world.

9Sailing on the Atlantic

10Portland, ME
.Enjoy the historic fishing port of Portland! In the morning, you'll have the opportunity to drive through the Victorian Mansion district to Casco Bay and the beautiful Portland Head Light. In the afternoon, you can visit the shipbuilding region of Kennebunkport. There are many architecturally significant houses in the region as well, and a Franciscan Monastery.

11Boston, MA
The Gloucester and Boston region is so significant to the American Revolution. Boston has been witness to all the changes in the growth of America, having been founded in 1630. Aside from the history, Boston is also iconic for sports, art, entertainment and more. You won't run out of things to do here! 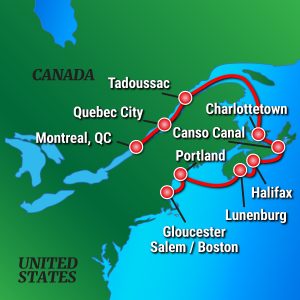 Read more about the Victory II