Florida cruises give you the chance to experience the serene waters of St. Johns River and enjoy the brilliance and beauty of its islands, seaports and cities, experiencing a side of Florida few others do. Discover Amelia’s pristine, quartz beaches; Green Cove Spring’s healing mineral springs, sparkling lakes and enchanting forests; and Palatka’s stunning Ravine Gardens State Park—brimming with azaleas and camellias in winter bloom. Immerse yourself in the history of the region exploring the influences of the War Between the States, Seminole and Civil Wars, and post-war affluence and opulence. Enjoy the exquisite architecture of St Augustine, the rich culture of the region including charming city shops, unspoiled beaches and bountiful landscapes on this memorable Florida cruise journey.

1Embark in Amelia Island, FL
This afternoon enjoy a leisurely cruise on the St. Johns River to Palatka. Sit atop the large observation deck and marvel at the magnificent wildlife along the shores.

2Palatka, FL
Once known as “The Gem of the St. Johns”, Palatka attracted America’s rich and famous after the Civil War. The welcoming town is now steeped in history of the War Between the States and is known for its worldwide shipping commerce of citrus and timber. Grand homes and restored houses stand as magnificent testament to distinguished residents that once called Palatka home. Nature enthusiasts may enjoy hiking the Florida trail and picnicking in the stunningly landscaped Ravine Gardens State Park, brimming with thousands of azaleas and camellias in winter bloom.

4Green Cove Springs, FL
High ground along the St. Johns’ banks and a flowing mineral spring attracted the first inhabitants to this area nearly 7,000 years ago. With the introduction of the railroads in the 1800’s, Green Cove Springs quickly became a favorite stop for wealthy Northerners searching for a warm retreat from winter’s harsh climate. Today Green Cove Springs boasts cool mineral springs, shimmering lakes and thriving forests that provide enchanting natural beauty. This charming city offers a variety of activities and sites for visitors, including the Clay County Historical and Railroad Museum, Camp Blanding Museum and Memorial Park.

5Cruising the Tolomato River
Tolomato River is an inland waterway, between the coastline and the Barrier Islands. Have your camera ready for glorious views of the Atlantic Ocean, visible just past the islands. The naturalist will be on the observation deck, pointing out the native wildlife and answering questions.

6St. Augustine, FL
Established in 1565, St. Augustine is recognized as America’s oldest surviving European settlement. With its historic ruins, public rose gardens, subtropical flora, tranquil waterways, freshwater lakes and championship golf courses, St. Augustine is always a passenger favorite. In the late 1800’s, oil millionaire Henry Flagler built a number of elegant hotels and churches in the old city in an attempt to fulfill his vision of establishing an American Riviera along Florida’s eastern shores. Although this “golden era” ended in the early 1900’s, Flagler’s legacy remains, and his buildings grace St. Augustine as both monuments to early American opulence and architectural ingenuity. Spend the afternoon exploring the unique architecture, narrowed streets and balconied houses of a city once used as a remote outpost of the Spanish Empire. You may also choose to join an organized tour of the historic villages of this fantastic city, including the fabled Fountain of Youth Park and the famous Potter’s Wax Museum.

7Amelia Island, FL
Discover the unspoiled beauty of pristine Amelia Island, with its miles of quartz beaches and rolling sand dunes, surrounded by calm waterways and the Nassau Sound. Throughout its history Amelia Island was home to Spanish explorers, French Huguenots and British settlers before enjoying its “golden age” during the late 1800’s when several wealthy Americans relocated to the picturesque island. Once a bustling Victorian seaport, Fernandina Beach, the island’s only city, now harbors a treasure trove of history, antiques, and collectibles just steps from your ship. Join a walking tour of Centre Street’s Historic District, with 50 blocks of restored 19th century Victorian homes and shops. Or take a leisurely stroll along the shady tree-lined avenues and explore Amelia Island’s charm at your own pace. 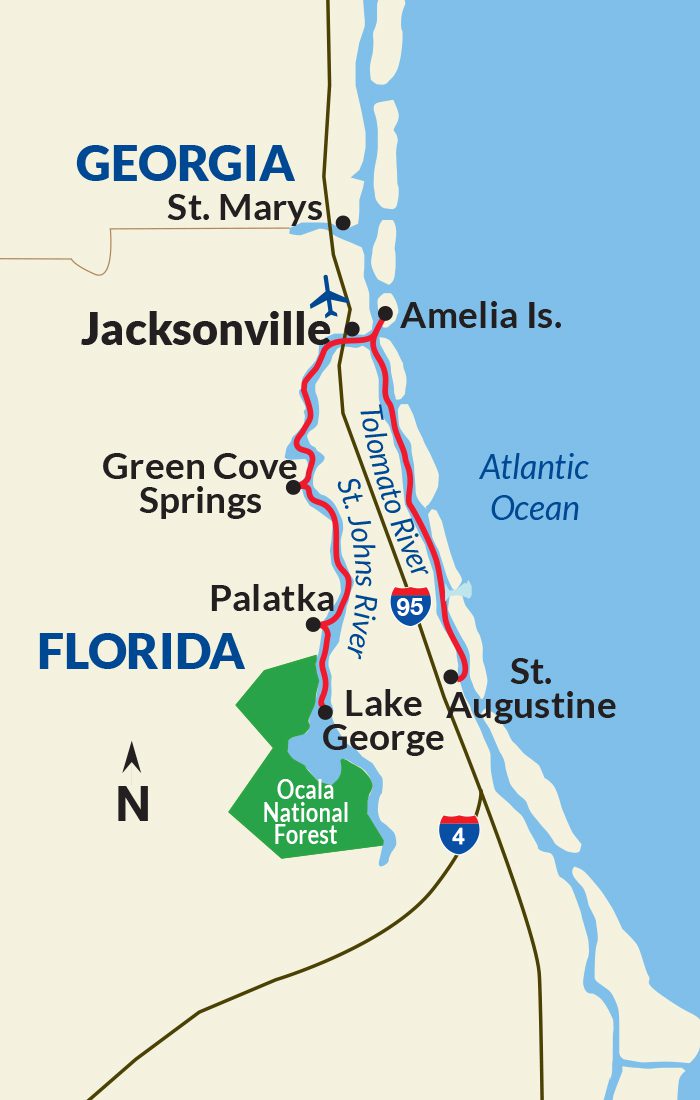 Read more about the American Star