From Beale Street in Memphis to Clarksville’s proximity to Nashville’s Music Row, strains and stories echo with each new discovery. Distilled spirits and barbecue heat warm your palate while your inner history buff relishes the rich heritage and wartime lessons that endure here.

1Nashville (Clarksville), TN
Enjoy your included pre-night hotel in Nashville/Clarksville. Clarksville is a modern, booming city with a charming small-town feel, located about 40 minutes northwest of Nashville. Clarksville is one of Tennessee’s oldest cities, founded in 1784 before Tennessee achieved statehood. The city prospered from river trade, especially tobacco, through the 19th century. The Customs House Museum, an ornate, Victorian building from 1898, offers local history and art exhibits, plus model trains. Northeast, surrounded by parkland, the vast Dunbar Cave complex dates back thousands of years. The McGregor Park Riverwalk follows the meandering, tree-lined Cumberland River. The river’s history is traced at the As the River Flows Museum. Fort Defiance, on a bluff 200 feet above the confluence of the Red and Cumberland Rivers, has been a hub of activity for more than two centuries. During the Civil War, the hilltop was chosen by Confederate troops as a site to defend the river approach to Clarksville. In 1862 the fort was captured by Union forces, renamed, and occupied for the remainder of the war.

2Nashville, TN
The post-Civil War years brought newfound prosperity to Nashville and left the city with a legacy of grand classical-style buildings, which can still be seen in the downtown area. With the advent of the Grand Ole Opry in 1925, Nashville soon became the capital of country music, as evidenced by such attractions as the Country Music Hall of Fame and the famous Music Row district. Beyond entertainment, Nashville is known for having incredible sports teams, great schools, and an affordable cost of living. In fact, Nashville is perennially ranked as one of the top places to live in the U.S. by U.S. News.

3Nashville, TN
Nashville is the capital of Tennessee and is situated on the Cumberland River. The city was founded by James Robertson and a party of Wataugans in 1779, and was originally called Fort Nashborough, after the American Revolutionary War hero Francis Nash. Nashville quickly grew because of its prime location, accessibility as a river port, and its later status as a major railroad center. By 1860, when the first rumblings of secession were heard across the South, pre-war Nashville was a prosperous city. The city’s significance as a shipping port made it a desirable prize as a means of controlling important river and railroad transportation routes. In 1862, Nashville became the first state capital to fall to Union troops. Though the Civil War left it in dire economic straits, Nashville rebounded. Within a few years, the city had reclaimed its important shipping and trading position, and, also, a solid manufacturing base.

4Dover, TN
Capture the romance of this little river town’s past and experience the everyday phenomenon of its future at Cross Creeks National Wildlife Refuge, an 8,862-acre habitat for waterfowl and aquatic plant life. Or venture to Land Between the Lakes National Recreation Area, one of the largest blocks of undeveloped forest in the eastern U.S. with over 170,000 acres of forests, wetlands, and open lands on a peninsula between Kentucky and Barkley lakes in Western Kentucky and Tennessee.

5Paducah, KY
In the hands of artists, modern Paducah was thrown into form. Fingertips muddied with passion and eased by the vision of river water glided along the surface to pull up the community and create the National Quilt Museum. Residents backstitch past into present, then bind appreciation for culture – ensuring that the seams of history will not soon come undone. The people of Paducah have taken great care to orchestrate every crevice of its community into a symphony of craft and color.

6Cape Girardeau, MO
Whether pedaling along the bike lanes that strip along the city streets, hiking through a state park, walking across one of many covered bridges, shopping for antiques, visiting area wineries, viewing murals that stretch the entire length of the downtown area, or stepping back in time at any number of historic sites, the Show Me State does not disappoint. Peeking through the long-standing architecture and handsome panoramas are moments that will mature into golden memories. Take time to embrace legends, discover a simpler time and relive the wonders of the past.

7Columbus, KY
Columbus was also the northernmost spur on the Mobile and Ohio Railroad. The Union responded by Gen. Ulysses S. Grant engaging the Confederates at Belmont on the Missouri shore. This was Grant’s first direct combat during the war. These actions are today commemorated at Columbus-Belmont State Park near Columbus. The Great Mississippi Flood of 1927 deluged the town, as well as many areas downriver in the Mississippi Delta, where hundreds of thousands of acres were flooded. Survivors moved the town of Columbus, rebuilding it on higher ground above the flood plain. Some of the original houses were saved and moved inland. Given its isolated location in a rural area and the decline in river traffic, the town has lost population for years.

8New Madrid, MO
New Madrid is famous for being the site of a series of more than 1,000 earthquakes in 1811 and 1812, caused by the New Madrid Seismic Zone. During your visit to this port, explore the history of earthquakes in addition to Native American artifacts and Civil War artifacts. Located on the river in the former Kendall Saloon at the foot of Main Street, the New Madrid Historical Museum reflects the history of the town from the Mississippian period up through the early 20th century. The Native American culture known as The Mississippian rose in the Mississippi Valley around 700 AD and lasted until approximately 1400 AD. The primary site of the Mississippians was near present-day St. Louis. The main settlement in the New Madrid area has come to be known as the Lilburn Fortified Village Site.

9Memphis, TN
As your journey concludes, there are other opportunities for you to take in the town -- whether it's an optional premier post-cruise experience or a quick transfer to the airport for your final trip home -- 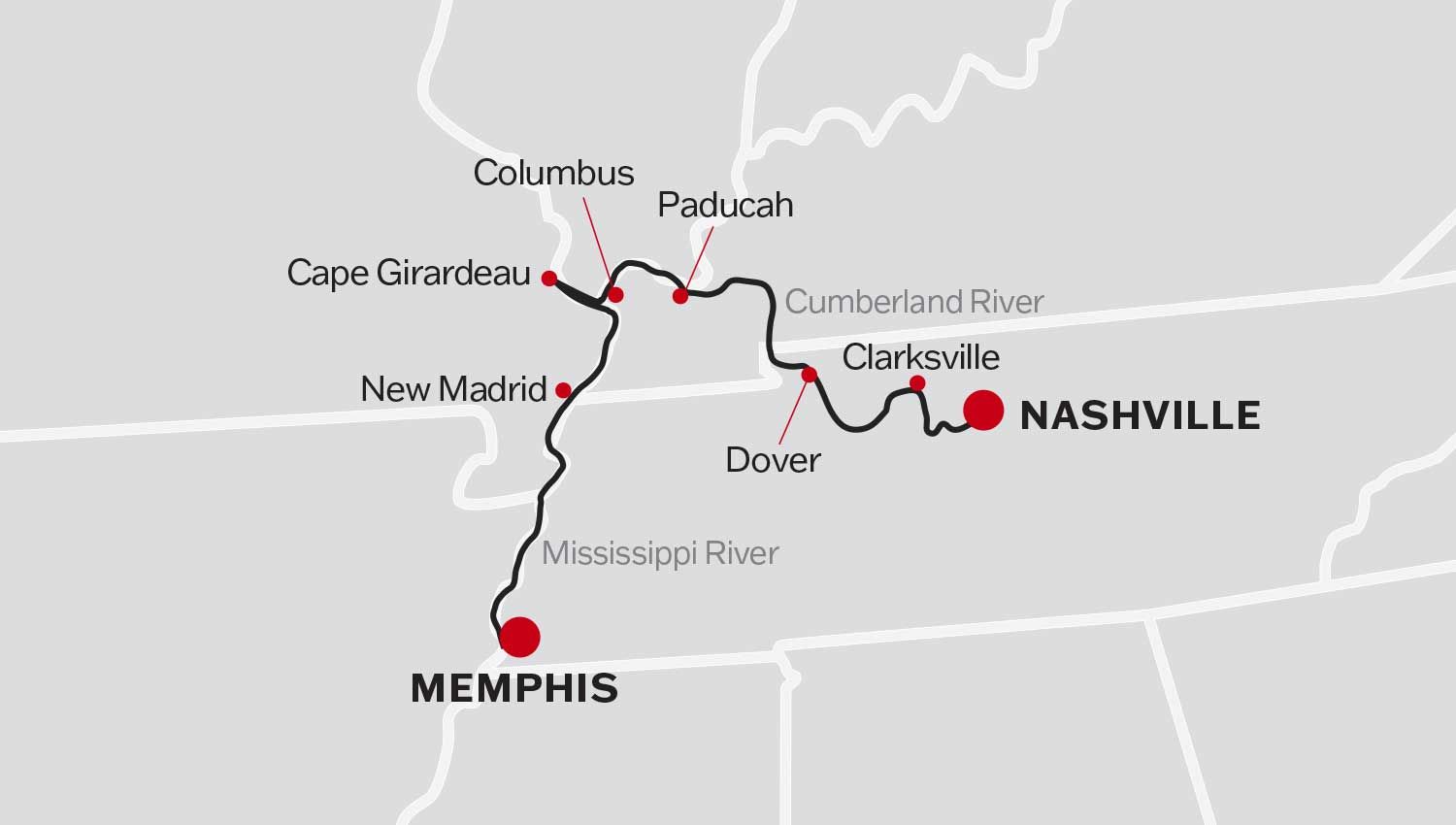 Read more about the American Queen