New Brunswick, Nova Scotia, and Prince Edward Island form the Canadian region known as the Maritimes. While exploring French Canada and the Maritimes, you’ll be transported – figuratively – to the ‘old world’. There is so much history living in the region, you’ll experience the layers of time and people who have lived there. But onboard the Victory I, old world meets new world luxury and modern convenience! Lay back and relax with a glass of wine on the sun deck, while looking out over the natural beauty of  places like  Prince Edward Island.

1Embark in Portland, ME
Welcome aboard the Victory I!

2Day at Sea
The days at sea are relaxing. You're free to enjoy onboard amenities, book a massage at the spa, or converse with the shipboard specialists.

3Halifax, NS
We start the day at the Halifax Citadel, a star shaped fort with a fascinating museum, including the 78th Highlanders. Then learn about Halifax's maritime history at the Maritime Museum of the Atlantic and even step on to a replica Titanic deck. Passing by the Fairlawn Cemetery we'll discover the story of how 100 bodies from the Titanic were recovered and buried. From there we drive out to Peggy's Cove to see the famous Lighthouse and have lunch.

5Charlottetown, PEI
In Prince Edward Island National Park, visit the farmstead that inspired the famous book "Anne of Green Gables" by L.M. Montgomery. Tour the house as well as the farm and other sites that inspired places in the book series, such as Lovers' Lane.

7Whale Watching / Tadoussac
Step on to the “Grand Fleuve,” an expert staffed whale watching boat, to take you on a water excursion to see the beautiful mammals in their natural habitat.

8Quebec City, Quebec
On a motorcoach, travel to the Plains of Abraham, the site of a 1759 battle between the French and British. From there you will visit Place Royale, the picture perfect town plaza of Quebec City. Then off to Montmorency Falls for a cable car ride to the top of the falls for epic views.

9Montreal, Quebec
One of the oldest cities in North America, Montreal turned 375 in 2017. Take a walking tour of the Old City and visit the Notre Dame Basilica, originally built in the mid-19th century. Climb Mount Royal for sweeping views of the whole city and the St. Lawrence River.

11Toronto, ON
After your last delicious breakfast onboard, you'll disembark and prepare for your journey home. 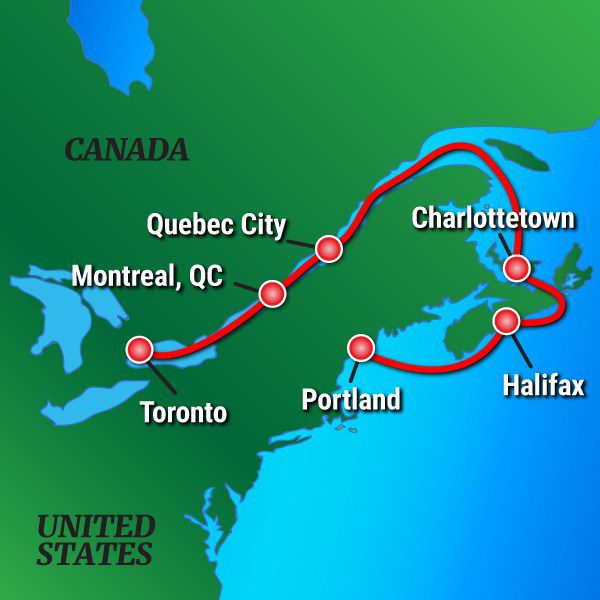 Read more about the Victory I