Cruise the entire length of the Mississippi River southbound, from Minneapolis to New Orleans. Enjoy all the wonder and history along the way, visiting bustling cities and small river towns that had stood the test of time.

2Embark in Red Wing, MN
Welcome aboard the American Queen! Listed as a National Geographic Traveler’s Most Historic Places in the World, Red Wing was built on a thriving pottery industry. You can still admire the craftsmanship at the Red Wing Pottery Showroom and the Pottery Museum of Red Wing.

3River Cruising
Enjoy the amenities on board the American Queen as you cruise down the Mississippi.

4Dubuque, IA
Iowa’s oldest city, and one of the oldest settlements on the west side of the Mississippi River, French-Canadian fur trader Julien Dubuque arrived in the area in 1785. This ‘All-American City’ has been home to many waves of immigrants, especially Irish and German, creating a thriving downtown and unique Historic Districts.

5Quad Cities, IA
Quad Cities is made of 5 neighboring towns and offers Civil War history as well as a blend of communities. A variety of shore excursions is offered at this port, including the Quad City Botanical Center.

6Burlington, IA
Spend a day wandering through the scenic streets of Burlington, visiting the local cultural centers and museums.

7Hannibal, MO
The hometown of Samuel Clemens, Hannibal has brought the stories of Mark Twain to life for you to explore around town. Visit his boyhood home, now a museum, as well as the caves explored by Tom and Huck and the homes of Becky Thatcher and Huckleberry Finn. Hannibal is also home to the Big River Train Town Model Train Museum and Ayers Pottery.

8St. Louis, MO
Take a complimentary city tour of the Gateway City and learn it's importance as the starting point of the Lewis and Clark Expedition.

9River Cruising
Enjoy the amenities on board the American Queen as you cruise down the Mississippi.

10Memphis, TN
During a guided tour of Memphis, see it's popular attractions, including Beale Street, the Peabody Hotel. the Sun Studio, and the National Civil Rights Museum.

11Helena, AR
Helena became the center of the booming popularity of Blues music in the 1940's with their radio show called King Biscuit Time, the longest running daily broadcast in American history.

12Vicksburg, MS
Civil War history is alive in Vicksburg, Lincoln’s ‘Key to the South.’ This vital river port city has since become a rich historical visit for tourists who want to learn about the battles of Vicksburg, as well as visit their museums.

13Natchez, MS
Natchez Indians and the first French explorers shared this beautiful piece of the river for many years. Officially founded in 1716, Natchez is the oldest city on the Mississippi River. Wherever you go, you’ll experience another piece of history, including unique shops, restaurants, museums and the historic homes of Natchez.

14St. Francisville, LA
Sitting on the bluffs of the Mississippi, St. Francisville is a historic town with over 140 buildings on the National Register. Walk through Old Market Hall or Royal Street. Or purchase the optional tour of Angola Prison.

15Nottoway, LA
Explore the largest remaining antebellum deep south mansion in this included tour of Nottoway Plantation. This mansion is three floors, 64-bedrooms, and has 22 white square columns, contributing to its nickname, ‘The White Castle of Louisiana”.

16Disembark in New Orleans, LA
You’ll bid the steamboat adieu, but perhaps you’ll want to stay in the Big Easy? Talk to our agents about extending your cruise with a New Orleans package. 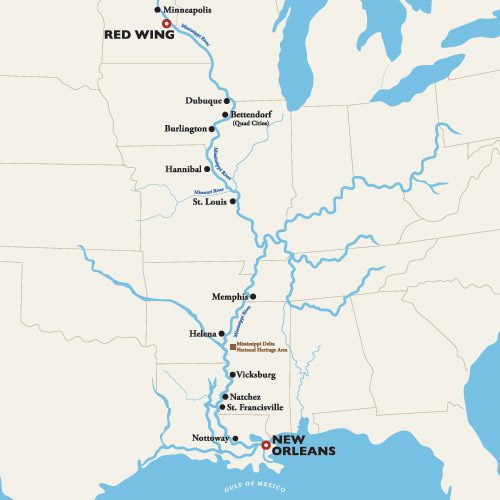 Read more about the American Queen

Dining is an uniquely American experience aboard the ship. Local ingredients used to create regional delicasies will charm your tastebuds. In addition to the main dining room, there are also an alternative venue for breakfast, lunch and dinner, as well as 24-hour room service for your convenience.

The first night of the vacation always includes a hotel night. This ensures that you are in the right city to board your boat on time. You’ll be rested and ready to go! Your breakfast and transfers to the boat are also included.

You’ll spot the buses right away – they look just like the ship! Two buses travel alongside the boat from port to port. At every port, you’ll be able to board these buses for the Hop-On Hop-Off shore excursions. The bus will have a set route in the town, and you can ride until you see someplace you want to go. Then catch the bus the next time it comes thru.