Millions of people live in Chesapeake Bay watershed area, but very few have ventured into its remote and silent backwaters.  Here, thousands of animal and plant species co-exist in a fragile ecosystem that’s on the mend due to incredible conservation efforts.  Blue crabs hide in underwater grasses, oystercatchers patrol the shores of uninhabited islands, and small communities live off the bounty of the surrounding waters.  Following in the paths of ancient native Algonquians and European explorers, including Giovanni da Verrazano and John Smith, kayak in tidal wetlands, creeks, and wildlife refuges that are sanctuaries for nesting seabirds.  With nearly 12,000 miles of shoreline, Chesapeake Bay has many wild secrets to discover!

1Washington, D.C. / Annapolis, MD / Embark
Arrive in the nation's capital and transfer to the lovely waterside town of Annapolis, where the Nat Geo Sea Lion awaits. Settle into your cabin and set sail in the early evening hours, cruising toward the Delmarva Peninsula, which separates the Chesapeake Bay from the Atlantic Ocean. We'll pass Poplar Island, the site of an innovative environmental restoration project.

2Smith Island
Anchor at Smith Island in the morning, just as local watermen make their way from the harbor out into bay in search of Maryland's legendary soft shell crabs. Take a walking tour of the island's main village and learn about the culture of the island's community and the challenges they face as the forces of erosion continue to hammer at these sandy, marshy Chesapeake outposts. Set out by kayak this afternoon, exploring some of the many water trails that wind through and around Smith Island. Watch for ospreys and egrets, as well as colorful American oystercatchers on the sandy beaches.

3Cape Charles, VA / Virginia Barrier Islands
Head to Cape Charles near the tip of the Delmarva Peninsula today, and continue to the wild Virginia Barrier Islands which buffer the peninsula from the Atlantic Ocean. We'll enjoy a day of exploration in these islands, following nature's cues and gliding into little-known back channels in Zodiacs. Depending on sea conditions, we may stop to visit Cobb Island or possibly Mockhorn Island Wildlife Management Area.

4Tangier Island
With a historic district that is listed on the National Register of Historic Places, Tangier Island harbors a community of crabbers and watermen that have been isolated from the mainland for nearly 250 years. Residents here developed a unique dialect, and a visit to the island takes us back in time. With community guides, discover the town by foot and golf cart while learning about local culture. Tangier Island is comprised almost entirely of salt marshes, which we'll venture into by kayak this afternoon, watching for glossy ibis and other birdlife.

5Blackwater National Wildlife Refuge / Choptank River
Known as the "Everglades of the North," Blackwater National Wildlife Refuge was established in the 1930's as a waterfowl santuary for migrating species and has been internationally recognized for its ecological importance. Here, lowland forest borders tidal wetlands with areas of shallow, brackish water, and the three habitats draw a diverse range of birdlife-more than 250 species have been recorded. Spend the morning exploring the refuge, keeping an eye out for bald eagles and the Delmarva fox squirrel. In the afternoon we arrive at the mouth of the Choptank River.

6Annapolis, MD / Disembarkation
Return to Annapolis this morning to disembark and transfer to the airport for your flight home. 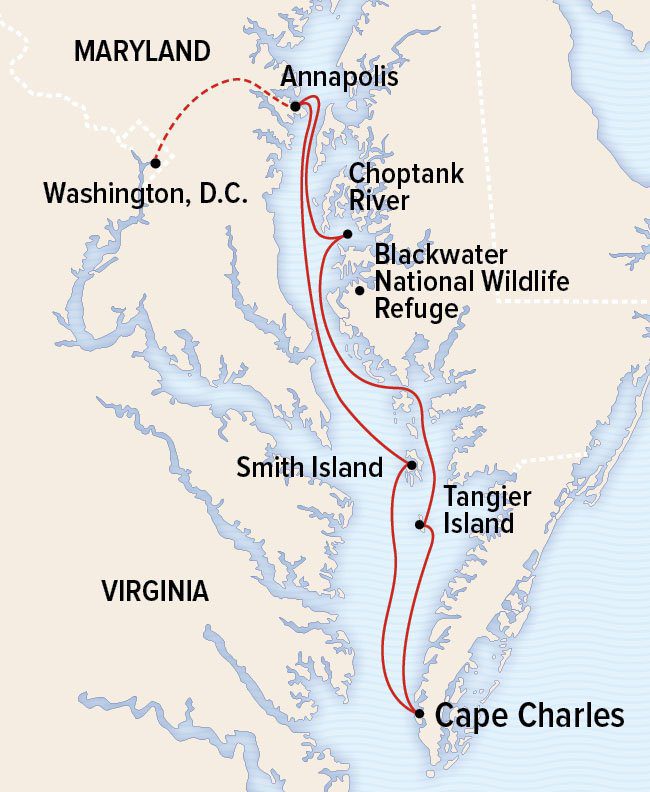