The Sea Islands stretch along the southeastern shores of the United States, a string of barrier and tidal isles that carve South Carolina’s Low Country into a maze of waterways and wilderness.  Sail among these islands during a short, enriching getaway, discovering sites that tell history of South Carolina and exploring wetlands, wild beaches, dunes, and maritime forests in parks and refuges along the coast.

1Charleston, SC / Embark
Arrive in Charleston and settle into your cabin aboard the Nat Geo Sea Lion. This evening, sail out of scenic Charleston harbor and follow the coast southwest, skirting the barrier islands that shelter the mainland.

2Beaufort / Port Royal Island
We round Bay Point Island early this morning and enter the mouth of the Harbor River. Be on deck as the South Carolina coastline awakens. We'll make our way along the coast of Port Royal Island to the historic town of Beaufort. This beautiful area was alternatively settled-and sometimes fought over-by English, French, and Spanish colonists as well as its original Native Americans. Dive into this diverse heritage today, visiting Old Shelton Church; the Port Royal Museum; and the Penn Center, the first academic school for freed people. See opulent historic mansions, and then head to Lady's Island Oysters for a tasting of oysters raised in the nearby estuary.

4Exploring Cape Romain National Wildlife Refuge
Trace the coast north past Charleston to Cape Romain National Wildlife Refuge, which spans 104 square miles from Bull Island in the south to Murphy Island in the north. We have an entire day to explore the refuge and discover its wildlife and history. Hike one of its many trails, or cruise close to shore in a zodiac, watching for dolphins & seabirds. Have your camera ready as we pass the Cape Romain Lighthouse.

6Charleston, SC / Disembark
This morning we disembark in Charleston where we transfer to the airport for your flight home. 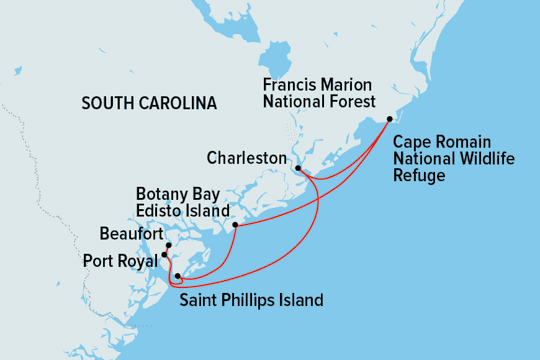