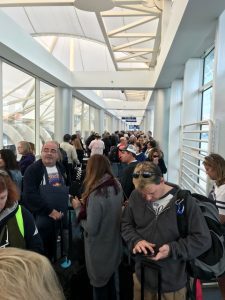 People ask me all the time why do I love small ship cruising vs large ship cruises? Well the truth is, it had been about 10 years since I took a large cruise, so I decided to take one in December 2017. It was on a beautiful ship – the Celebrity Eclipse – which held about 2800 passengers. When we arrived at the port in Miami, there were several very large ships, but we were able to find our ship – or should I say, we found the line to our ship (yuck – I forgot that part of big ship cruising). After waiting in line for over an hour, we finally got inside the terminal where we found more lines! It was kind of confusing to sort between the different lines, but after another 45 min. we were boarding our ship.

We wandered around and found our cabin. Not all of our luggage was there yet, but our cabin attendant was, and he was very helpful. He told us if we wanted to eat at the specialty dining rooms, we needed to make reservations ASAP to guarantee times or dates, so we found our way to where they were taking those reservations. And again, we waited in line for about 20 minutes, finally getting our reservations in.

We had a lovely dinner in the main dining room, but I totally forgot that wine was not included. It was fine – a little overpriced, but not bad. Then they added the 19% gratuity on it. In fact, 19% gratuity was added on all drinks, including Coca Cola. The show was great and we enjoyed our evening service.
The next day we had a day of sailing and there were all kinds of things to do: a casino to play in, an art auction, music playing everywhere and a wonderful spa. So, you know where I went, right? I was given a tour of the spa and told for only $99 per day you can use all of the facilities (pool, jacuzzi, Sauna). All services had their own charges like massages, facials, wraps, hair and nails, etc. I chose to just enjoy the ship’s pool and relax. That day my husband and I decided on what shore excursions we wanted to do – almost every one of them was over $100 per person, but we chose a few and confirmed them for the next few days.

The bottom line of this whole story is that I now know why I LOVE small ship cruising: its just plain easier and for us, less expensive. On this large ship cruise, we paid extra for soda, espresso and lattes, all alcoholic drinks, and even bottled water! We also paid to eat in the specialty dining rooms (a minimal fee $30 to $50 per person), we paid for all the shore excursions, and we even paid for some things on board the boat, like a specialty bakery or ice cream shop. Even though room service is free, you still have to pay the 19% gratuity.

The large ship also included two semi-formal dress nights in the dining rooms, which were fun but a pain to pack for. On our small ships its resort casual, so no worrying about dressing up. Another major thing I forgot about is that in most of the places we went, we had to tender in to the port towns (which was another ‘hurry up and wait’ thing!!). Unlike our small ships you just get off and walk around the towns and get back on when you want to. Pretty simple!

The last but not the very least thing was disembarkation. This has gotten better than it was 10 years ago, however you still have to get up early, get out of your cabin and hurry up and wait – for as much as a few hours or more depending on the times you are given to get off. This is something I truly forgot how much I hated, until I had to do it again!

This cruise we took was wonderful. For a large ship cruise, it was standard. But this girl probably won’t be doing any of these large ship cruises in quite a while. I think I will just stick to my small ships!!