The Bonneville Dam was one of the most innovative American industrial projects of the early 20th century. It was proposed in 1929 by the Army Corps of Engineers, and it wasn’t until Franklin Roosevelt took office that any action took place. 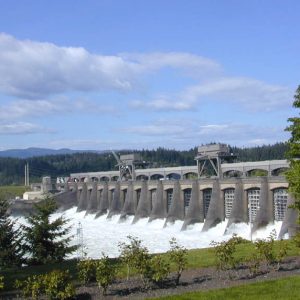 A dam of this magnitude is not without its share of fascinating history and facts. Without giving too much away—should you choose to tour the facility—here are some of what we find most interesting:

The Bonneville Dam took four years to build. In that, it required the manpower of 3,000 workers, with teams operating non-stop eight-hour shifts (24/7 labor). By the dam’s completion, 26 people had died.

The result? A dam that’s a half-mile long and about 200-feet high. The first powerhouse sees 96,667 gallons of water per second. That’s enough to fill a three bedroom house in just one second. When it first opened in 1938, the navigational lock was the largest single lift in the entire world. As you can see, it was quite the engineering feat.

Fish ladders were built into the dam to assist salmon for swimming upstream. A series of gates and chambers help facilitate migration patterns so they aren’t stopped by the barrier of the dam.

Interestingly, some fish weren’t able to swim in the dark, so lights had to be installed that would essentially mimic sunlight.

3. The fish are counted by an actual human being

You’d think the technology exists for this role. However, issues arise like fish who circle back and swim through twice or species so similar they need to be distinguished by a person. Computers are unable to account for these.

Thus, when you visit the Bonneville Dam you’ll see a “fish counter’s booth”. During the “peak” of the fish runs, that person may see between 10,000 to 20,000 fish pass within the hour.

This disappoints those who have always visited on the Oregon side: when accessing from Washington, you can visit Powerhouse 1 (on Oregon, this is only available for those on VIP tours).

You descend 60-feet via escalator to what’s the “belly of the dam”. Here, you can literally feel the force of the river as it rushes beneath your feet. As you can guess, it’ll give you a totally different perspective on the power of the Columbia River!

Due to its engineering brilliance and its historical significance, the Bonneville Dam is typically one of our travelers’ favorite stops along the Columbia River tour. You can check out the full itineraries, or contact one of our agents for more information!