Have you been following the saga of the Delta Queen? There are currently two pieces of legislation in the U.S. Congress that, when both are passed, will allow the Delta Queen to resume operation. The Delta Queen has been purchased by a company that intends to cruise as soon as these bills are passed into law. The boat has been taken to Houma, Louisiana for repairs and to get ready to return to the river. You can follow their progress on their Facebook Page. But what are these two bills that will help the Delta Queen? 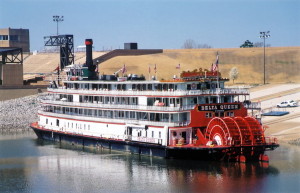 HR 1248: Introduced by Congressman Steve Chabot (R-OH), this bill will extend the exemption of 50+ passenger ships that aren’t constructed of fire-retardant materials through October 30, 2028. The exemption used to exist, but was not renewed in 2008 – permanently docking this national treasure in Chattanooga, Tennessee.  This bill also mentions that annual structural alterations must occur to at least 10% of the vessel per year, to replace the parts of the ship not constructed with fire-retardant materials.

Both bills have had bi-partisan support, which is encouraging. When President Obama was a senator, he co-sponsored similar legislation, so it is hoped that he will sign these bills when passed by congress. But first, it has to pass congress! If you are passionate about paddlewheels, especially the historic Delta Queen, please contact your senators and representatives to support #HR1248 and #S1717!