If you have the Canadian Maritimes on your travel list, you probably fall into one of two categories:

Both answers are valid, but I willingly admit that I fall into category No. #2. I was raised with Megan Follows as my Anne Shirley, and the idea of seeing the home of Matthew and Marilla, or walking the pathway on the coast where Anne would walk with Diana Barry (or Gilbert Blythe) is enough to make me swoon. Maybe I’ve had too much currant wine… – I mean, raspberry cordial!

But the Canadian Maritimes are more than just the setting of L.M. Montgomery’s classic book series. In addition to Prince Edward Island (PEI), Nova Scotia and New Brunswick are also provinces in the region. Fresh seafood, strawberries and cranberries, local beers and wine, stunning highland and coastal landscapes, wildlife, and friendly locals make this area a refreshing and relaxing vacation destination!

New Brunswick is a bilingual province, having been settled by the French immigrants called Acadians in the north (the Acadians for which a park is named in Maine, and who later migrated to Louisiana and had their name Americanized to “Cajun”) and the British in the south.

The island of Grand Manan lies close to the coast of Maine in the Bay of Fundy. The Victory ships are not scheduled to visit New Brunswick in 2020, but that doesn’t mean you couldn’t extend your cruise with a stay to explore the province yourself. The coastline along the Bay of Fundy is particularly beautiful.

The name “Nova Scotia” implies a strongly Scottish history, but it played a major role in times of war and peace between the British and French. After the signing of the Treaty of Utrecht in 1713, mainland Nova Scotia was granted to Britain, and Ile Royale (now Cape Breton Island) was given to France. On the east side of the island, the French built the Fortress of Louisbourg, which became an important outpost in a sheltered harbor. Two and a half miles of stone wall 30 feet high was built around it as fortification. When France and Britain went to war in 1745, nearby New England militia saw the fortress as a threat to their homes and fishing industry, so they put Louisbourg under siege and forced a surrender.

After the Treaty of Aix-la-Chapelle was signed in 1748, Louisbourg was returned to French control. But the British began building their own fortress in Halifax, on the British side of Nova Scotia. After the French and Indian War, Louisbourg once again fell to the British, who chose to dismantle the structure. Some of the stone was shipped down to Boston and used to construct Louisbourg Square. Today, the fortress has been partially reconstructed, and there you can catch a glimpse life in the 1700s. (They even fire cannons during summer!)

Halifax, meanwhile, established a Royal Navy base and citadel. As Louisbourg was defeated, Halifax became the more important port in Nova Scotia. Today, the port is still very active. It still maintains the small Canadian port town feeling, with a few modern touches. 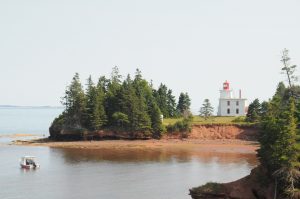 Prince Edward Island does have more to offer than locales from “Anne of Green Gables,” but that series really did capture the life and culture of the island at the time. Originally a French village settled by personnel from the Fortress of Louisbourg, the town was transferred to British control the same year that British forces captured and dismantled Louisbourg.

The island has always been made up of farming communities, with fishing on the coasts. Biking and hiking are popular there, on its nearly 300 miles of trails. The island continues to offer a relaxed way of life. There wasn’t even a bridge to the island until 1997; before that, there was one ferry to New Brunswick or one ferry to Nova Scotia. The Victory ships stop in Charlottetown, famous for its white beaches and red earth (and Anne Shirley).

The rich and varied culture and history of Prince Edward Island have melded to create a unique region in eastern Canada. As you explore, you’re just as likely to see a Gaelic word as you are a French word. And the traditional East Coast music will have you tapping your toes!

All meals on board can be enjoyed in The Coastal Dining Room, served by the professional staff. The regional dishes will tantalize your palate while views of the shore go by the windows. Alternatively, you can enjoy a buffet breakfast and lunch or seated dinner at the more casual venue, The Grille.

A popular gathering place on board each ship is The Tavern. It’s a great place to grab a drink or watch the view any time of day. In the early evening, it’s the spot where musicians entertain.

All onboard meals, including High Tea services and nightly cocktail parties, are included in the cruise fare. Soft drinks, water, coffee, tea and non-premium beer, wine and spirits are also included.

Each ship has a crew of 84, so there are plenty of attentive staff members to take care of you during your cruise. Someone will be there to make your favorite cocktail, fluff your pillow before bed and keep the ship clean and running smoothly. Also, onboard experts will accompany you on excursions and offer insights into each region’s history, wildlife and culture.

The staterooms on both ships are modern, fresh and luxurious. They feature 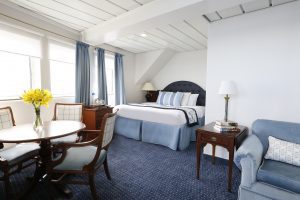 100% Egyptian cotton sheets, a choice of pillow options, plush towels, robes, slippers and plenty of closet space and underbed storage to keep your space clutter-free. Ranging from 146 to 335 square feet, the staterooms include two twin beds or one queen bed, plus an armoire, a chest of drawers and fresh fruit daily. Try to book your trip early enough to reserve the coveted Owner’s Suite, which includes a sitting area, a sofa-bed, complimentary laundry service and a minibar.