Thanks to everyone who voted in the Facebook poll last week – I got to spend a very enjoyable day at Astoria, Oregon with my two children and my cousin. We had an amazing time!

The city of Astoria, from the heights of the Column. 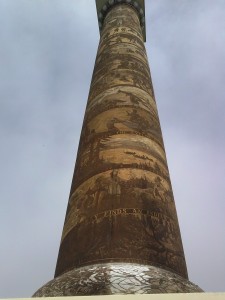 First stop: the Astoria Column! The column is an amazing tower of history. The sides are inscribed with regional history and beautiful pictures. Take a few minutes to look around before you climb the tower. You’ll want to visit the Gift Shop before and after you climb the tower. Before you head up, you’ll want to buy a wooden glider airplane. These are for you to fly from the top of the column. After you climb, you’ll want to head back to the Gift Shop for a very important purchase: either a magnet that says you made it to the top of the Column, or a pin that says you did not. 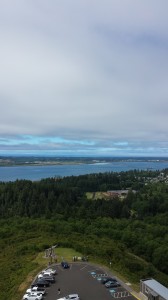 The view from the top is breathtaking! (Or maybe that was the walk up) Seeing the Columbia River on the right and Youngs River on the left, merging just before pouring into the Pacific Ocean. But you have to keep going up to enjoy it. The staircase is 164 steps to the top of the 125 foot column. There is only one spiral staircase, so you should know that you will hit traffic traveling in the opposite direction of you. Of course, it’s not really a race to the top anyway. Sometimes, it’s nice to have to stop for others.

Take some time to wander around the column, as well. There are all sorts of interesting historical markers, including the first community antenna for cable television – who knew? There’s also a burial canoe, donated on the 150th anniversary of Astoria.

Astoria has a beautiful Riverwalk that wraps around the entire town. It’s a great way to see the city as well, because so many businesses are there. If you’re out walking and your feet get tired, you can always hop on the Astoria Trolley to take you back! 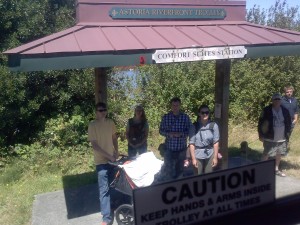 For $1, you can ride the trolley however long you want. If you think you’ll need to get on and off more than once, you can buy an all day pass (a stamp on your hand) for $2. The trolley runs along the Riverwalk. And it’s a great way to learn interesting facts about the town’s history, and what its like today. 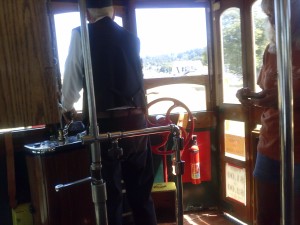 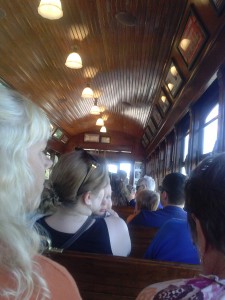 The conductors take turns telling local stories. Up on the hill – the house from Goonies; the school from Kindergarten Cop. One block north of the track you’ll find the Bowpicker – serving the best fish and chips in Astoria! Open until they run out of tuna (yes, its tuna fish and chips). But there’s also a large variety of flavors available in town. On the riverside of the trolley, you’ll see the Maritime Museum, the Coast Guard ship, the free “Clean Your Fish” station, the ancient canneries that are now pubs, etc. Oh, and did you know that every can of salmon from Alaska is stored in Astoria? I didn’t know until I rode the trolley! 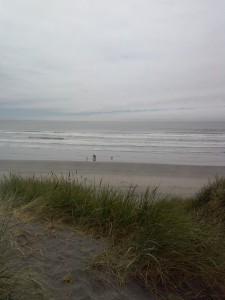 I chose to head to the ocean – one town west of Astoria is Warrenton, and that’s where you can hike the very steep sand dune to find the Pacific Ocean! Although the morning was overcast, I was SHOCKED at how warm the ocean was. I am a northwest native, and I’ll always put my toes in the ocean (even though I know it’ll be like ice water). I prepared for the oncoming wave by tensing my shoulders and squeezing my eyes shut – but the water was warm! What a treat – and a perfect ending to a perfect day at the beach!

Look for more opportunities on our Facebook page to vote in the future! You could choose where to send me, or which shore excursion to send one of our agents on! Thanks, again, for those who voted! 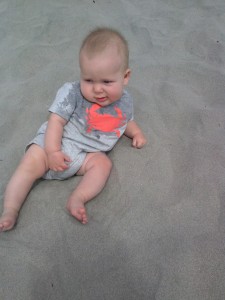