Be a witness to the history of America. Board the new coastal cruise ship – the American Constitution – as it visits our capitol Washington, D.C. and iconic cities that were important to the formation of America and the American Revolution. Visit battlefields, colonial homes, and historic towns along the Chesapeake Bay.

1Embark in Baltimore, MD
Besides being the home of the Orioles, Baltimore is near Fort McHenry, where the ‘Star-Spangled Banner’ was inspired during the Battle of Baltimore in the War of 1812. Originally a poem, Francis Scott Key wrote the ‘Defence of Fort McHenry’ to honor the American resistance to the British Royal Navy’s bombardment.

2Norfolk, VA
We’ll begin at the mouth of the Chesapeake Bay, first colonized by British settlers in 1607. Have your cameras ready for pictures of the tall schooners in the Bay’s waters, as well as naval vessels and oystermen. If you choose, today you are invited to tour the Norfolk Naval Base – largest in the world!

3Williamsburg, VA
Transport back in time to Colonial Williamsburg! The 18th century buildings – both original and reconstructed – are the perfect backdrop as you interact with tradespeople of the time period, using historic tools and techniques to teach you about this city that was once Britain’s largest empire outpost in what is now North America. Williamsburg makes up 1/3 of the Historic Triangle.

4Yorktown, VA
Today you can visit the other 2/3 of the Historic Triangle: Yorktown and Jamestown! Yorktown was the site of the last major battle of the Revolutionary War, where General Washington surrounded Cornwallis’ army in 1781 and received their surrender. Jamestown was America’s first permanent English colony in 1607, and still today is home to impressive life-size re-creations of the fort, the three ships that brought them from England, and the Powhatan village. Walk with historical interpreters to understand 17th century life in Jamestown.

5Washington, D.C.
Named for the general who won the Revolutionary War, and our nation’s first President, Washington, D.C. is the heart of our nation. Follow an expert guide on a tour of the National Monuments and memorials around the mall, including the Lincoln Memorial, the National World War II Memorial, the Martin Luther King Memorial, and more. If you’d rather take a tour indoors, let the cruise directors arrange a visit to the Smithsonian Museums for you! Will you choose American History? Air and Space Museum? The National Portrait Gallery? So many to choose from!

6Mount Vernon, VA
Originally a 1.5 story house built by his father, President Washington acquired the property in 1754 and began enlarging to the 21-room historic home that it is today. Tour the private estate, offering a portal to 18th century plantation life.

8Cambridge, MD
See the Bay aboard the skipjack Nathan! Skipjacks are oyster dredging sailboats, used in the Chesapeake Bay since the 1880s. Join the crew of the Nathan as you sail the Choptank River. If you’d rather relax, head towards the 18th century LaGrange Plantation for a Sweet Tea party!

9St. Michaels, MD
Start with a walking tour of colonial St. Michaels before venturing out to explore the many options in this town. St. Michaels is home to the Chesapeake Bay Maritime Museum, and 18-acre waterfront property with 10 exhibit buildings, working boatyard and the historic lighthouse. Or take a private eco tour of the Chesapeake Bay with a naturalist to point our wildlife and landmarks as you go.

10Annapolis, MD
A trolley tour of Annapolis is available, giving you a good overview of the history and the town. Get your ID out for a tour of the Naval Academy, founded in 1845. Or if those don’t interest you, perhaps visit the Annapolis Maritime Museum, located in an old oyster packing building, or take an audio tour of historic Annapolis.

11Disembark in Baltimore, MD
After breakfast, transfer to the airport or extend your stay with a hotel package. 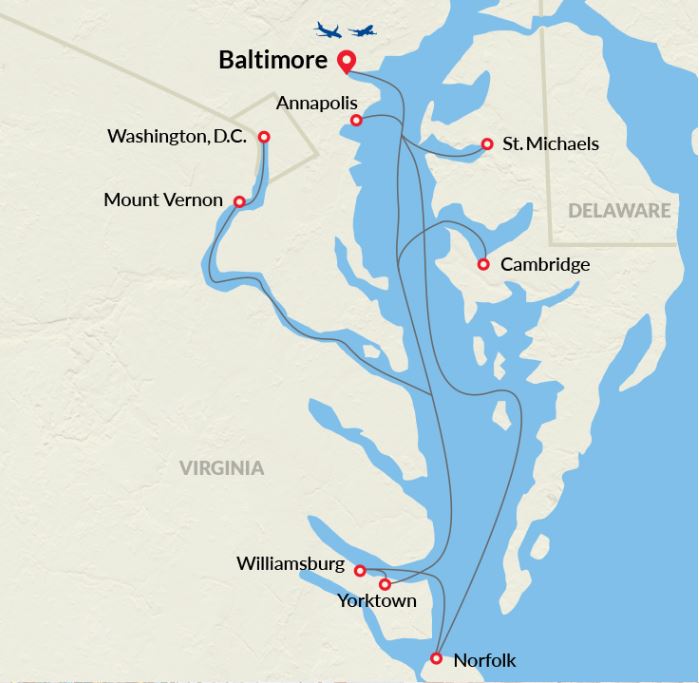 Read more about the American Constitution