With only two New England Fall Foliage cruise departures a year, this Pearl Mist 10-night voyage sells out quickly every year. Starting in Portland, round the Canadian Maritimes, visiting popular ports of call like Halifax and Charlottetown, as well as the stunningly beautiful Iles de la Madeleine! The ship will then head inland into the Saguenay Fjord before following the St. Lawrence River to Quebec City.

You’ll also enjoy the natural beauty of Bar Harbor, Maine; and the Canadian villages of Lunenburg; Gaspe,Baie-Comeau, and Picton and the Perce rock formation

1Embark in Portland, ME

2Bar Harbor, ME
This enticing village sits on the east side of Mt. Desert Island. Bar Harbor has been a destination for relaxation and outdoor exploration since the 19th century. Bar Harbor borders the Arcadia National Park, famed for its beauty. You can dive deep into local history and culture at the Abbe Museum, detailing the Wabanaki tribe indigenous to the region.

3Lunenburg, NS
Established in 1753, Lunenburg was the first British Colonial settlement in Nova Scotia. The waterfront is home to the Fisheries Museum of the Atlantic, home to a replica of Canada’s Bluenose.

4Halifax, NS
Halifax is the capital of Nova Scotia, and has long been the symbol of the Canadian Maritimes. You can visit the Maritime Museum of the Atlantic, or stroll down the Bohemian Spring Garden Road neighborhood. The Halifax Citadel National Historic Site is a 19th century fort with beautiful views of downtown Halifax. The Citadel is home to two historic regiments – the 78th Highlanders and the Royal Artillery.

5Pictou, NS
On the north shore of Nova Scotia, Pictou is the ‘Birthplace of New Scotland,’ home of the first wave of Scottish immigrants in 1773. Pictou places its old-world charm on display, with a historic waterfront, tree-lined streets with period homes, and museums.

6Charlottetown, PEI
Ever read Lacy Maud Montgomery’s novel, Anne of Green Gables? Prince Edward Island is world famous for its sandy beaches and historic/literary sites. You can visit Green Gables, the farmhouse featured in the novel. For the history of PEI, tour the exhibits at Founders Hall.

7Iles de la Madeleine, QC
The Iles de la Madeleine is an archipelago with seven inhabited islands, six of which are connected by the 55-mile-long Route 199. The name of the islands was first written on an early map by Jacques Cartier around 1536, although settlements didn’t begin until 1650. La Grave is on Amherst Island, home of the archipelago’s largest forest. Great for hiking, shopping, and cultural centers.

8Gaspe & Perce, QC
Gaspe is where Jacques Cartier first claimed the land for France in 1534, marking it as the ‘Birthplace of Canada.’ Gaspe Bay is the 2nd largest natural bay in the world. We’ll take a train down the coast to the village of Perce, which borders Perce Rock. You’ll be lining up to take photos of this stunning natural feature.

9Baie-Comeau, QC
The first thing you may notice as we approach the archipelago are the harbor seals and seabirds. Take a walk along the sandy beach, between the clear waters and forests. Take the guided walking tour through Boise de la Point Saint-Gilles, a bird conservation and wildlife refuge.

10Saguenay Fjord, QC
The Saguenay Fjord is a stunning stretch of scenery! Whale watching is popular with the St. Lawrence River meets the fjord. The small villages along the way are timeless. Above the cliff at Cap Trinite stands a 33-foot statue of the Virgin Mary. 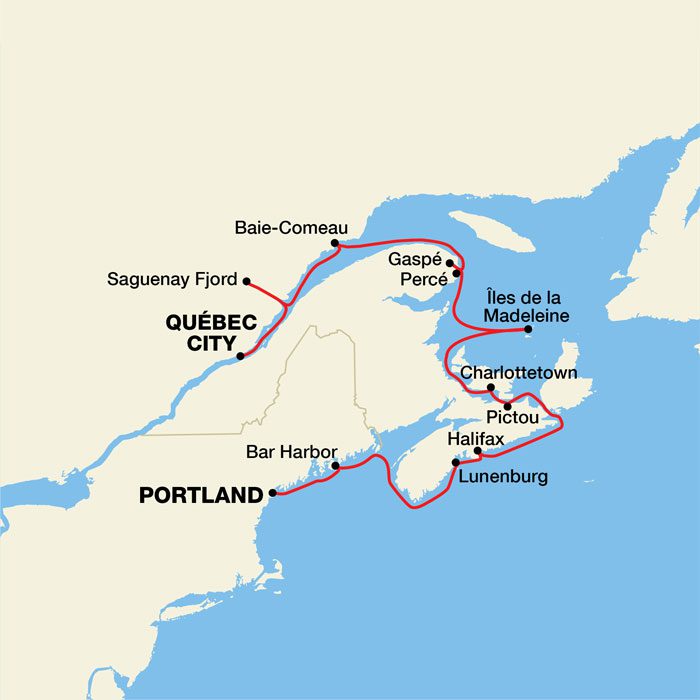