There is nothing as epic as spending a full three weeks cruising the entire length of the Mississippi River! From New Orleans to St. Paul, you’ll be blown away by the beauty, history, and cultures that you’ll experience as you cruise north. With only one departure date available per year, your preferred stateroom could be taken at any moment. Book early to secure your passage aboard the ‘America‘! Cruising the Mississippi River does include big cities like New Orleans, Memphis, St. Louis and St. Paul. But you also get to stop in small towns that were once vital to the westward-growing United States, like Vicksburg, Red Wing, Paducah, Natchez and more. And the ‘America‘ will stop in even smaller areas for their natural beauty or cultural importance, like Oak Alley, Cape Girardeau, and Hannibal.

1Embark in New Orleans, LA
Begin your Deep South adventure by exploring the Big Easy! Enjoy the Cajun-inspired food and music, as well as the area’s most beautiful attractions, including the French Quarter, the garden district, and more.

2Oak Alley, LA
The paddlewheel will pull right alongside the riverbank, allowing you to step off the ship right in front of the leafy canopy of Oak Alley – row of perfectly aligned 300 year old trees that perfectly frame the path to the plantation. After the tour of the antebellum plantation, we’ll gather for mint juleps on the west lawn.

3Houmas House, LA
Houmas House is often considered one of the favorite plantations on the Mississippi River to visit. 38 acres of gardens. 16 rooms filled will period art and antiques. Your host will share many stories about the inhabitants of Houmas House, as well as lead many conversations about humor and songs in the South.

4Baton Rouge, LA
The great state capital has its own cultural flavor and flair. After breakfast, you’ll be greeted by those who will welcome you to Baton Rouge, and maybe provide a few Mardi Gras beads. Meet the ghost of the Old State Capital, Sarah Morgan, and tour the new Louisiana State Capitol, the tallest state capitol in the country.

5St. Francisville, LA
This is an exciting day! Your complimentary excursion is a tour of Rosedown Plantation. Learn about the family history of the Turnbulls, as well as time to relax in a rocking chair on the front porch, with a cold drink.

6Natchez, MS
Enjoy a private city tour with a local expert guide who can point out the influences of different people, from the indigenous Native American to the European and African cultures. You’ll visit the unfinished Longwood Plantation, left undone when the workers immediately left mid-job to fight in the Civil War. Other optional activities for today include an exclusive piano concert in the JN Stonehouse, or a tour of the Frogmore Plantation where you’ll be able to pick cotton from the fields and witness the technology that creates 900 bales-per-day.

7Vicksburg, MS
You cannot visit Vicksburg without touring the Battle of Vicksburg location, now a National Military Park. You’ll see the restored gunboat, the USS Cairo, as well as walk the battlefield of the Siege of Vicksburg.

8Greenville, MS
You’ve ventured to the soul of the Mississippi Delta. You can take a narrated city tour of the largest city in Mississippi, or visit the BB King Museum & Delta Interpretive Center, located between Greenville and Greenwood.

9Memphis, TN
Visit historic Beale Street to hear the beat of ‘Blues City’ or head over to Graceland to pay tribute to the King of Rock and Roll, Elvis Presley!

10New Madrid, MO
Originally built in 1776, New Madrid is a living monument to early American history. Sites you can visit include Veterans Park, the Kochtitsky Home and the Trail of Tears Water Route, which passed by New Madrid on their way to present-day Oklahoma.

11Cape Girardeau, MO
This old French trading post and river port remains loyal to its heritage and continues to share that history with all visitors. The complimentary excursion is a narrated city tour and visit to Old St. Vincent’s Church, an English Gothic Revival unique to still be standing in the U.S. Another possible activity would be to visit the Trail of Tears State Park, a memorial to the Cherokee Indians who were forced to march to Oklahoma

12Chester, IL
“The City of Popeye” is open to you! The birthplace of Popeye-creator Elzie Segar has marked the town with statues of beloved Popeye characters, and continues to add new statues each year. Everyone will line up to get their picture taken with the 6-foot-tall bronze statue of Popeye!

13St. Louis, MO
Explore the city, from the Gateway Arch on the riverfront to the Anheuser Busch Brewery stables to Forest Park.

15Hannibal, MO
Learn all about the beginnings of the great Mark Twain in his boyhood hometown of Hannibal. Be sure to also visit the Interpretive Center, which houses 15 original Normal Rockwell paintings!

17Davenport, IA
The complimentary shore excursion in Davenport visits the John Deere Pavilion and store. Learn the story of the company, and how John Deere continues to contribute to agricultural development. Another option in town is to visit the John Hauberg Indian Museum in the Black Hawk State Historic Site.

18Dubuque, IA
One of the oldest settlements west of the Mississippi, Dubuque is a fascinating town full of just about everything. The complimentary shore excursion includes a historic city tour. Dubuque has Victorian era attractions, and you’ll learn about the history of this beautiful town with stops at Mathias Ham House and the Old Jail Museum.

20La Crosse, WI
Enjoy the day at Riverside Park, where the Black River and La Crosse River join the Mississippi waters. Surrounding the town are the 500 ft bluffs including the Grandad Bluff mentioned by Mark Twain in his ‘Life on the Mississippi’.

21Red Wing, MN
Red Wing is a fantastic river town with much to explore. Take a bald eagle viewing cruise with Captain Rusty. Or tour the town on the Red Wing Trolley to visit local shops, art galleries, and antique stores. Or tour the Red Wing Pottery workshop, where they’ve been producing stoneware for three generations. 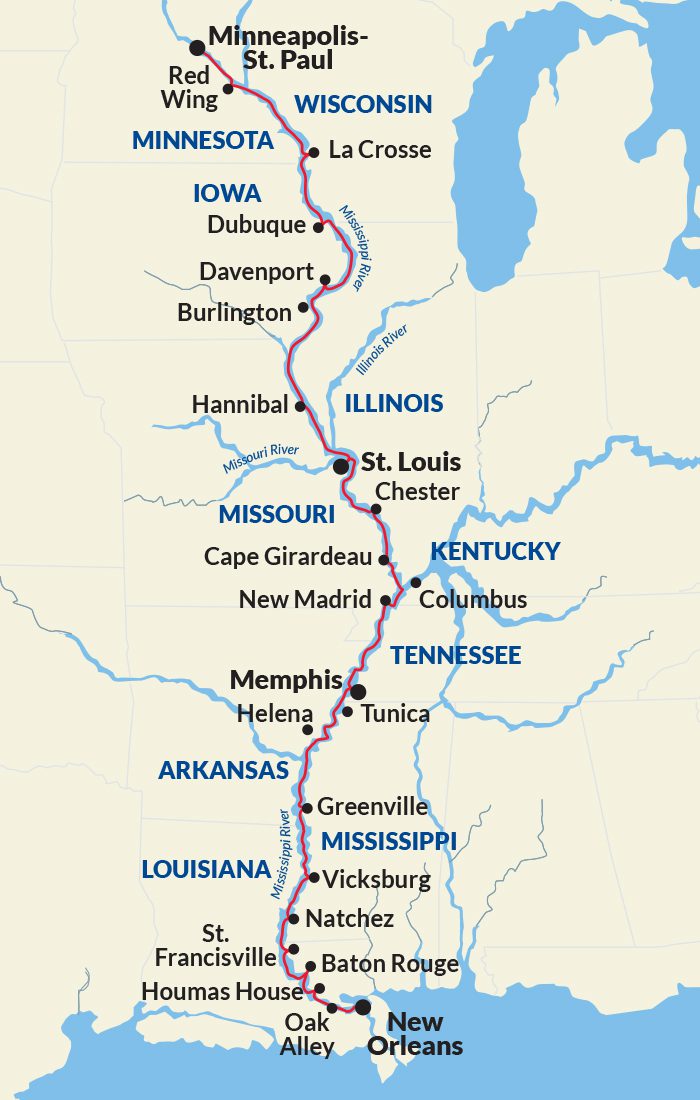 Read more about the American Melody