Engage the history and beauty that has always set apart the Great Lakes as a summer retreat destination. This freshwater ecosystem has become home to unique wildlife and created fantastic geographic wonders. Cruise for  12-days from Toronto to Milwaukee (or reverse). Take the time to stand in awe at Niagara Falls. Get excited watching the horse-drawn buggies on Mackinac Island (no cars allowed). Leave the Great Lakes to cruise around Georgian Bay – the unofficial sixth Great Lake. Walk aboard the historic SS Keewatin, a turn-of-the-century steamship built to transport passengers through the Great Lakes. Participate in local Ojibwe traditional life with an dance and drum presentation. Explore the tulip fields of Holland, Michigan full of color in this Dutch-themed town. A visit to Dearborn Village and the Henry Ford Museum makes for a day filled with history and invention! The Great Lakes & Georgian Bay Cruise is a fantastic summer holiday.

1Toronto, ON
Begin your journey in Toronto, established as a Native American settlement and French fur trading post. Within its impressive skyline, there are several cultural hotspots including art galleries, museums, and performance centers. Shoppers will delight in Queen Street West, where chic boutiques replaced this old warehouse area and Kensington Street, where retro style abounds.

2Niagara Falls, ON
World-famous Niagara Falls stands 165 feet tall and is comprised of three waterfalls – Horseshoe Falls, the American Falls, and the Bridal Veil Falls. These famous falls are shared by both Ontario and New York which are connected by the Rainbow Bridge. Our local guide will show you the best vantage points and will explain the importance of the falls to Native Americans and fur traders.

3Cruising the Great Lakes
As we make our way to Windsor, Ontario, witness the natural wonders and majestic beauty of the Great Lakes from the comfort of your fully-furnished private balcony. Along the way, delight in the locally inspired cuisine prepared by our team of master chefs.

4Windsor, ON
Windsor is known as the “City of Roses” due to the several large parks and gardens that adorn its waterfront. Although it is also sometimes referred to as the “Automotive Capital of Canada,” the city maintains 3,000 acres of green space, 180 parks, and 40 miles of trails. Led by our local expert guide, visit the Henry Ford Museum and admire the vast collection of artifacts documenting the inventions that have changed our way of life. Also tour Greenfield Village, a living museum which chronicles 300 years of American history.

5Midland, ON
Midland is the main town and economic center of the area located at the southern end of Georgian Bay’s Thirty Thousand Islands. Learn about the history of this fascinating city with a visit to Sainte-Marie among the Hurons, a living museum depicting 17th-century missionary life. Stroll along the Midland Harbor, a picturesque destination featuring a large statue of the trumpeter swan, considered the symbol of Midland. For bird lovers, the Wye Marsh Wildlife Centre is a habitat for Trumpeter Swans, Black Terns, and Least Bitterns.

7Parry Sound, ON/Cruising the Georgian Bay
Located on the eastern shore of Georgian Bay in Lake Huron, Parry Sound is a picturesque port town with charming cottages and spectacular views. As you cruise the Georgian Bay, enjoy its serene beauty from the ships’ sundeck where you can admire views of Flowerpot Rocks, windswept pines, rugged coast, and clear blue waters.

8Little Current, ON
Located along the north shore of Manitoulin Island, Little Current is considered the gateway to the World’s Largest Freshwater Island. Home to the native Ojibwe, this charming town is known for its swing bridge, a one-lane bridge and the only vehicular access to the Island.

9Sault Sainte Marie, ON
Located at the mouth of Saint Mary’s River, Sault Saint Marie was originally established by Jesuit missionaries in the 17th century. Saint Mary’s River connects Lake Superior to Lake Huron and has provided trade access between the United States and Canada for hundreds of years. The blend of the native Ojibwa with the French and English settlers paints a unique and diverse cultural portrait of this incredible destination.

10Mackinac Island, MI
Mackinac Island is a living Victorian town where personal motorized vehicles are prohibited – all those visiting or living on the island travel by horse or horse-drawn carriage, bicycle, or on foot. While Mackinac Island is known for its opulent Victorian homes and hotels, it has a long Native American history. Anishinabe-Ojibwe tradition holds that the island was a sacred place populated by the first people and was home to the Great Spirit Gitchie Manitou.

11Muskegon/Holland, MI
From historic ships and lighthouses to the restored mansions built by Muskegon’s most famous lumber barons, delight in the history and scenery of this quaint Michigan town. Referred to as “The Riviera of the Midwest,” Muskegon has grown from a fur trading and lumbering town to a vibrant tourist destination. Explore the delightful town of Holland where hundreds of Dutch immigrants live and immerse yourself in its genuine Dutch culture. 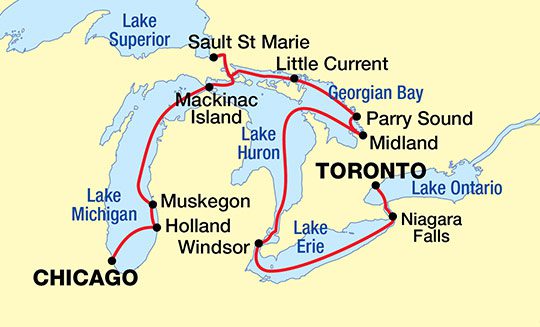