The beautiful and clear waters of the Great Lakes is home to a handful of towns and villages that delight in having guests come and visit. The rugged beauty of the area combined with the incredible August weather makes this 7-night Great Lakes cruise unforgettable. Sail among the Thirty Thousand Islands and visit the remarkable and charming towns along the way.

Ports of call include:

2Muskegon/Holland, MI
The European flavor of Holland, Michigan stems from its roots as a haven for Dutch immigrants who arrived in the mid-1800’s. Popular attractions such as DeZwaan, the only authentic Dutch windmill in the U.S.; the new Dutch Galleries at the Holland Museum, a world-class collection of 17th, 18th, and 19th century art, furniture and artifacts from the Netherlands; their internationally-known Tulip Time Festival; and more recently the Tulipanes Lationo Art and Film Festival, continue to bring acclaim to Holland.

3Mackinac Island, MI
Located in the Straits of Mackinac, where the upper and lower peninsulas of Michigan meet, Mackinac Island is a living Victorian town. Personal motorized vehicles are prohibited – all those visiting or living on the island travel by horse or horse drawn carriage, bicycle, or walking. While Mackinac Island is known for its opulent Victorian homes and hotels it has had a long history. Anishinaabe-Ojibwe tradition holds that the island was a sacred place populated by the first people and was home to the Great Spirit Gitchie Manitou. Because of its location, it was a Native American gathering place. Since then it has been the site of French missionary churches, a center of the fur trade, and later, the fishing industry, before becoming dependent on tourism to fuel the local economy.

4Sault Sainte Marie, ON
Located at the mouth of Saint Mary’s River, Sault Saint Marie was originally established by Jesuit missionaries in the 17th century. The rapid of Saint Mary’s River connects Lake Superior to Lake Huron and have provided trade access between the United States and Canada for hundreds of years. The combination of the native Ojibwa with the French and English settlers paint a unique and diverse cultural portrait to visitors.

6Parry Sound, ON
Parry Sound is located on the eastern shore of Georgian Bay in Lake Huron. It is the world’s deepest natural freshwater port. The body of water that gives the town its name was named after the Arctic explorer Sir William Edward Parry. The modern townsite was established in 1857 and in the late 19th century rail service reached Parry Sound making it an important depot along the rail lines to Western Canada. The town was important during the First and Second World Wars with its explosives and munitions factory. The birthplace of hockey legend, Bobby Orr, the town also is known for its annual sailing regatta and performing arts festival.

7Midland, ON
Midland is the main town in Georgian Bay's Thirty Thousand Islands region. Visit the Saint-Marie among the Hurons - a 17th century French Jesuit Mission headquarters. The expert guide will show you the replica of the barracks, homes, and meeting places as you learn about the first interactions between Europeans and native people in this region. Or head over to the SS Keewating - a steamship built in 1907 and retired in 1966. This Scotland-built boat used to cruise the entire length of the Great Lakes.

8Disembark in Toronto, ON
Originally a native Indian settlement and a French Fur trading post, Toronto is a delight to explore from Eaton Centre Shopping Mall, where you can find anything available in the world, to the north end’s Chinatown, to the Bata Shoe Museum. Discover Inuit Indian artifacts, the modern sculptures of Henry Moore and Pop Art in the Art Gallery of Ontario. Throughout the city there are art museums and exhibits to fulfill every art lover’s dreams. Shoppers will delight in Queen Street West, where chic boutiques replaced this old warehouse area and Kensington Street, where retro bargains abound. 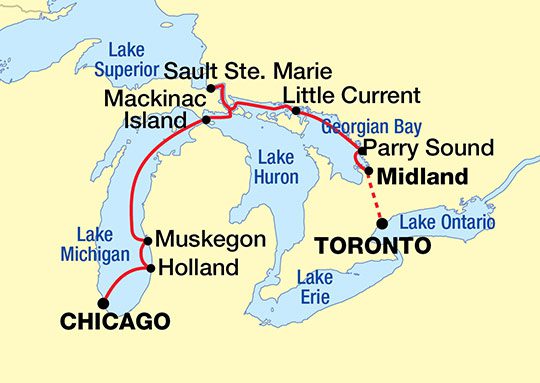