Your journey begins and ends in the musical meccas of the US.  Along the way, discover the cities, small towns, and legendary rivers that define the south.

Explore Memphis, birthplace of the blues and home to the King of Rock and Roll, Elvis!! Enjoy a day of cruising along the Ohio and Mississippi Rivers.  Stroll along the riverfront of Paducah adorned with a life size mural depicting the city’s cultural past.

Experience a relaxing day of cruising the idyllic Lake Barkley and Cumberland River as you admire the rolling river landscapes from the sun deck or on your own private balcony.  Let our expert historians bring Civil War history to life at the Fort Donleson National Park in Dover, and Fort Defiance in Clarksville.  End your amazing journey in Nashville the home of the Country Music Hall of Fame.  Discover the treasures of this vibrant city on a guided exploration or take in a show at the Grand Ole Opry!!

3Paducah, KY
Founded by William Clark (of Lewis & Clark), Paducah is know as a National Heritage Destination with many talented culinary artists, painters, potters, and jewlers creating their works there. Also known as "Quilt City", there is plenty to see and do in Paducah.

5Dover, TN
The quint town of Dover is a historic treasure as well as a place of beauty. Home to the Fort Donelson National Park, the town played a pivotal role in the Civil War as the site of a major Union victory.

7Nashville, TN
From the Grand Ole Opry to the Country Music Hall of Fame, Nashville is the official headquarters of country music.

8Nashville, TN
End your Music Cities journey in the Capital of Country Music. Stay an extra day to see what this dynamic city has to offer!! 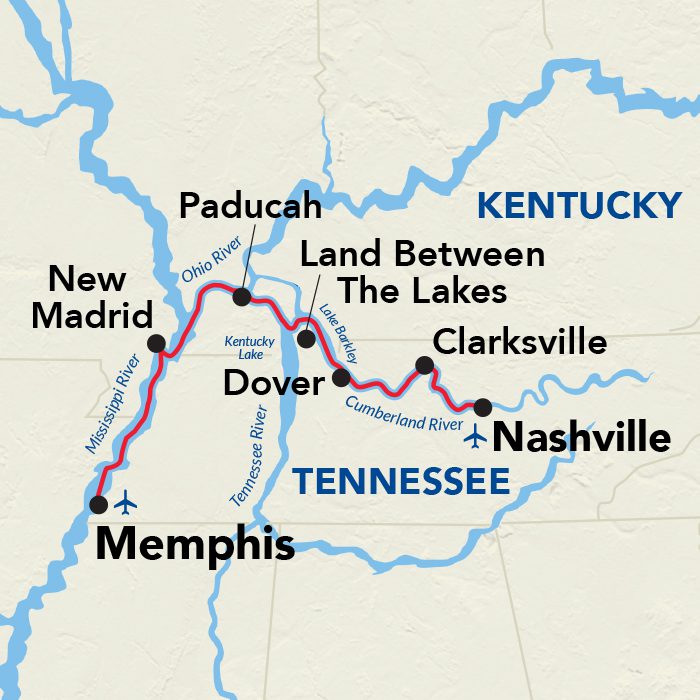 Read more about the American Jazz