Sail along the legendary St. Lawrence Seaway and the Atlantic coast of the US on a memorable voyage that combines scenic landscapes and storied cities. Led by a team of experts, explore the unspoiled wilderness near Trois-Rivières, Louisbourg and Lunenburg by land and water. Experience New York City’s expansive Central Park, an oasis in the middle of a bustling metropolis, and immerse yourself in the rich histories of Quebec City, Norfolk and Charleston. Travel between Toronto, Canada and Ft. Lauderdale, Florida on this amazing voyage!

1Toronto, ON
Embark your ship and settle into your stateroom. Toronto is beloved by many as one of Canada’s boldest and most innovative capitals. Hugging the shores of Lake Ontario and facing the picturesque Toronto Islands, it was founded by British loyalists fleeing the American Revolution in 1793. Today the city is a pleasure to explore on foot, whether strolling past the Victorian bay-and-gable homes of Rosedale, or the historic enclave of Wychwood Park, an Ontario Heritage Conservation district. The city’s Distillery District is home to North America’s largest preserved collection of Victorian industrial architecture.

2Scenic Sailing: St. Lawrence Seaway Locks
A brilliant feat of engineering, the St. Lawrence Seaway comprises a series of locks, canals and channels that allow ships and goods to travel from the Atlantic Ocean up the St. Lawrence River to Lake Superior. Seven locks point the way between Montreal and Lake Ontario, detouring past rapids and several dams. The 27-mile Welland Canal lifts ships over the Niagara Escarpment to Lake Erie, sidestepping Niagara Falls. The Canadian-and American-operated waterway is known locally as “Highway H2O” for the traffic and trade it allows.

3Trois-Rivieres, QC Canada
Trois-Rivières is the cultural center of Quebec’s Maurice region. This picturesque city was established in 1634, the second—after Quebec City, in 1608—to be permanently settled in New France. With its strategic location, it played an important role as all eyes looked west to trade fur with the First Nations peoples. “Three Rivers,” the city’s anglicized name, is located at the point where two islands in the Saint-Maurice River break the waterway into three channels before it spills into the St. Lawrence. Today, stately century-old buildings form the core of the Old Town.

4Quebec City, QC
Quebec City is by many accounts the most French city in New France. The Old Town’s centerpiece, the magnificent Château Frontenac, seems transported from the palatial landscapes of the Loire Valley, and its French-accented streets lead past white-stone buildings that evoke old-world medieval villages. The only remaining walled city in North America outside of Mexico, Quebec City was fortified in the 17th century soon after its founding in 1608. Its strategic setting on the rocky promontory of Cape Diamond gave troops a close view of the St. Lawrence.

5Scenic Sailing: St. Lawrence River
Flowing through the fertile lowlands that link the US Great Lakes to the Atlantic Ocean, the St. Lawrence River is one of North America’s most scenic waterways. Canada’s second longest river features a number of great cultural capitals, including the stately facade of Château Frontenac, the gleaming skyline of Montreal and the pastoral island of Île d’Orléans. To the island’s east, the river widens into the largest estuary in the world, passing small towns, gently rising hills and rocky banks. Farther east, the long Île d’Anticosti marks the mouth of the river.

6Cap-aux-Meules, QC
The village of Cap-aux-Meules—or Grindstone Cape—was named for the headland on Grindstone, one of Quebec’s 13 Magdalen Islands. Its French moniker, rarely used in English, is nonetheless its official name. This is the second largest of the Magdalens by area, a low-lying expanse ringed by rugged shores that was inhabited by the Mi’kmaq tribe when they came on a seasonal walrus hunt. The first European to step on this land was Jacques Cartier in 1534. Today, some islanders are descendants of shipwreck survivors and live in houses built out of wood retrieved from the waters.

7Cape Breton Island (Louisbourg), NS
Cape Breton Island sits at the confluence of the Gulf of St. Lawrence and the Atlantic Ocean. Hiking paths dot its terrain, inviting treks through its rolling farmlands, striking highlands and dense forests, while sheltered inlets call to kayakers and boaters to explore the rocky shoreline. The island is home for an array of birdlife, including cormorants, hawks and skuas. The fortified town of Louisbourg was one of France’s strongholds in North America during the 18th century. Today, the partially reconstructed fortress and its former town are a National Historic Site.

8Lunenburg, NS
Nova Scotia’s coast still retains much of its unspoiled natural beauty. Rolling hills and boreal forests stretch to coastal cliffs that steeply drop to rugged shores dotted with sheltered bays and sea caves. The site of the first permanent European settlement north of Florida in the New World, it is rich in maritime heritage. The city of Lunenburg was once a busy shipbuilding center. Its historic Old Town is both a UNESCO World Heritage Site and a National Historic Site, considered the best surviving example of planned British colonial settlement in North America.

9Sail the Atlantic Ocean
Sail the Atlantic Ocean, divided in half, north to south, by the Mid-Atlantic Ridge. Longer than the Rockies, the Himalayas and the Andes combined, this underwater mountain range is the longest on Earth. As you sail today, attend an informative lecture or watch a film on our 8k laser-projected panoramic screen in The Aula, one of the world's most advanced venues for learning at sea. This indoor-outdoor experience allows nature to take center stage with its retractable floor-to-ceiling windows that unveil 270° views.

10New York City, NY
New York City is at once romantic and exhilarating. From the robust streets of Lower Manhattan’s financial district to the intimate warrens of Greenwich Village, the city overflows with culture, cuisine and architectural beauty. New York is for everyone. Music lovers marvel at Carnegie Hall or catch a 1920s-style jazz and blues show in Harlem. Romantics board a horse-drawn carriage in Central Park. Art lovers browse the Museum of Modern Art or the Guggenheim. And theatergoers attend the greatest shows in the world on Broadway, amid the glitter of Times Square.

11Sail the Atlantic Ocean
Sail legendary waters, where medieval Europeans believed “there be dragons” beyond the ocean’s horizon. Soak up the views from the Finse Terrace, a unique outdoor lounge area named after a famous mountain plateau in south-central Norway. Relax amid your surroundings in comfort, with heated couches and lava rock “firepits,” allowing you to enjoy the outdoors no matter the temperature, as you admire the dramatic scenery or expansive ocean vistas.

12Norfolk, VA
With its striking setting on a wide natural harbor, Norfolk is home to the world’s largest naval base. Dozens of vessels line seven miles of wharfs on the waterfront. The city’s identity and history are intertwined with the US Navy and other military branches. Norfolk is also the resting place of General Douglas MacArthur, the much-decorated US Army commander. He and his wife are entombed at the MacArthur Memorial, a museum in Norfolk’s former City Hall. This remarkable collection sheds light on the general’s life with preserved uniforms, personal papers and memorabilia.

13Sail the Atlantic Ocean
The nutrient-rich waters of the Atlantic Ocean are home to more than half of the world’s fisheries, annually providing millions of tons of fish and other marine species for human consumption and industrial purposes. As you sail, take advantage of the array of delicious cuisine offered on board. You may visit Mamsen’s, our casual gourmet deli, any time from early morning to late at night for a taste of traditional Norwegian fare. Or, dine at Manfredi’s Italian Restaurant for authentic fare with options ranging from Milanese risotto to Tuscan-inspired classics.

14Charleston, SC
Charleston is a historic center of Southern culture. Founded in 1670, it sits between two estuaries and is fronted by a deep natural harbor. An important commercial port since colonial times, the city was also a leader in the secessionist movement; the capture of Fort Sumter by Confederate forces on April 14, 1862, marked the beginning of the Civil War. Today, Charleston is notable for its many well-preserved colonial homes and churches, charming streets and courtyards, and expansive parks and gardens. The Charleston Museum, founded in 1773, is the oldest museum in the US.

15Sail the Atlantic Ocean
The Atlantic Ocean derives its name from Greek and means “Sea of Atlas,” a reference to the mythological Atlas, a Titan who supported the heavens on his shoulders as a punishment for fighting the gods. As you sail today, relax in the Explorers’ Lounge, inspired by epic journeys of discovery. Marvel at the views through the two-story panoramic windows as you share a cocktail with friends, or settle down to read a book. 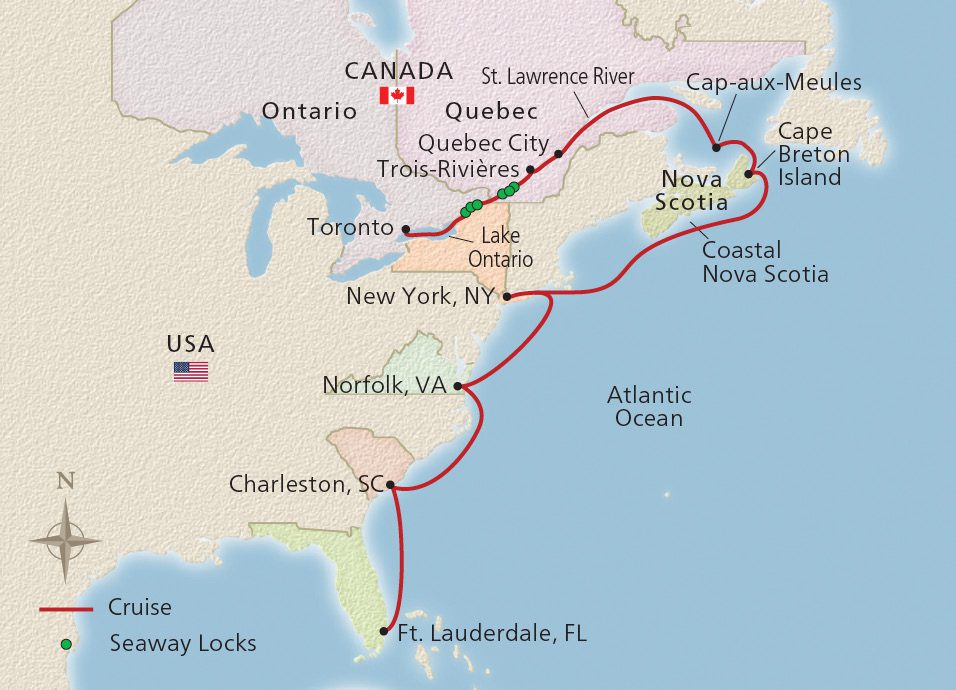 Read more about the Viking Octantis