Puget Sound and the Salish Sea make for one of the most intriguing and majestic cruising grounds anywhere. You’ll spend eight magical days cruising round trip from Seattle, WA; exploring hundreds of islands (many of which are uninhabited) that are nestled between the United States mainland.. Enjoy the diverse wildlife of hawks, whales, sea lions, and much, much more. Partake in fascinating guided tours to historical museums and sites, and just take in the culture and spirit of the Pacific Northwest.

1Embark in Seattle, WA
Our cruise departs from the picturesque Seattle, WA as we cruise to the Puget Sound

2Anacortes, WA
Anacortes is much warmer than its neighbors, so you can make the most of your time here. Saunter over to Deception Pass State Park, one of the most photographed locations in Washington State. This park’s miles of scenic shoreline, serene trails, and abundant wildlife make this a rewarding destination for all visitors.

3Cruising the San Juan Islands
Enjoy cruising along Puget Sound, Skagit Bay, and Deception Pass. This waterway is an intricate system of channels, estuaries and islands that lend it to the most breathtaking scenery and majestic wildlife.

4Friday Harbor, WA
From the moment you step off of the ship your senses will electrify from the intoxicating aromas and majestic views of Friday Harbor. Take a step back in time and experience island life as it was over a century ago by visiting the San Juan Historical Museum. Explore Friday Harbor’s diverse topography from pebbly beaches to monstrous mountains and lush valleys. This eclectic town has something for everyone!

6Port Townsend, WA
Forested islands, snow-capped mountains, and pristine beauty surround you as your ship cruises through the San Juan Islands and Admiralty Bay into the Victorian seaport town of Port Townsend. Explore Port Townsend’s vibrant downtown, designated a National Historic District, where you will have access to historical museums, art galleries, and specialty boutiques. Port Townsend is also home to the Fort Worden State Park. This turn-of-the-century army base offers an unmatched combination of natural beauty and historic wonders. Wander the park’s acres of beautiful beaches, wooded hills and open fields, framed by stunning vistas of the Olympic and Cascade mountain ranges and the Strait of Juan de Fuca.

7Poulsbo, WA
Known as “Little Norway,” Poulsbo was settled in 1892 by Norwegian loggers and fishermen who likened the fjord-cut landscape to their homeland. Explore the heart of Poulsbo by taking a stroll along Front Street, featuring old world murals, numerous art galleries, and specialty shops. End your day with a walk along Poulsbo’s boardwalk, where you have the opportunity to view wildlife in their native habitat and majestic snow-capped Olympic Mountains off in the distance.

8Disembark in Seattle, WA
Welcome back to Seattle! After a delightful week of cruising, enjoy the sights and sounds of the Pacific Northwest. Start your day by visiting Pike Place Market, internationally recognized as America’s premier farmer’s market. Visit Seattle’s Space Needle where you will have stunning views of Seattle, Puget Sound, and picturesque snow-capped mountains. 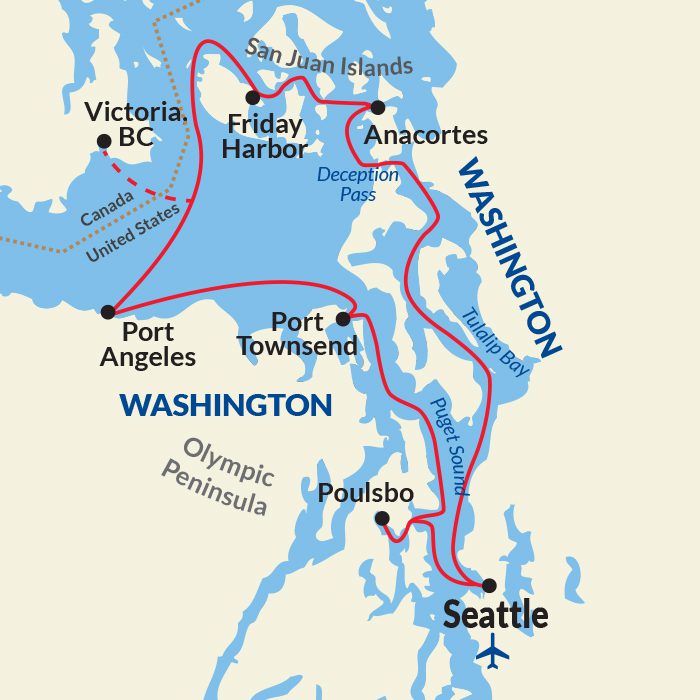 Read more about the American Spirit