Cruising the river, you’ll enjoy big cities and small river towns. Some you’ve heard of and others are a new adventure. In our Destination Spotlight series, we’ll help you get acquainted with these new destinations to prepare you for your cruise. Today we’re highlighting Block Island, Rhode Island.

Block Island was originally inhabited by the Niantics, an Algonquian speaking tribe of Native Americans that lived in modern-day Connecticut and Rhode Island. They named the island, “Manisses,” which means Little Island, or God’s Little Island. In 1524, Geovanni de Verrazzano saw the island and declared it to be named “Claudia.” In 1614, Dutch explorer Adriaen Block visited the island to map it, naming it for himself.

Continued European settlement led to increasing tensions with and among the Niantic people. This came to a head during the Pequot War from 1636 to 1638. The war began after a trading expedition to Block Island was attacked and killed. The Governor of Massachusetts sent 90 men to Block Island with instructions to kill every Native American on the island. The English burned villages and stole crops, but death reports vary between 1 and 14 killed.

The island was first claimed by conquest by the Massachusetts Bay Colony. Then began a series of change in owners until 1661, when settlers began moving to the island. The number of Native Americans living on Block Island in 1664 was estimated between 1200-1500, but by 1774, that number had dropped to 51.

During the War of 1812, the British Navy attempted to occupy Block Island for its strategic location and supplies. However, the island had already sent its food stores and livestock to Connecticut. When the Navy attempted to then claim the stores on the mainland, their fleet was damaged.

Block Island has no natural harbors, so the US government began work on Old Harbor in 1870. The islanders did much of the work building the breakwater, and completed the project in 3 years.

There were five major shipwrecks off the coast of Block Island. In 1738, the Palantine went down after catching fire. A schooner was wrecked in 1831. In 1846, a ship carrying coal ran aground. A steamer and a schooner wrecked each other in 1907. And in 1939, a tanker ran aground in front of the Southeast Lighthouse.

The Block Island Conservancy was formed in 1971. Their mission was to preserve open space on the island. Today, more than 40% of the island is preserved open space for everyone to enjoy.

When Your Cruise Stops in Block Island 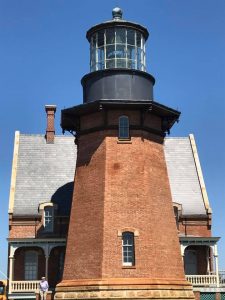 Relish your day relaxing on Block Island. Your visit will be all about enjoying the view. The island has 28 miles of walking trails, exploring the rolling hills, farmland and panoramic views. The Nature Conservancy named the island one of the “12 Last Great Places in the Western Hemisphere.” Your cruise will offer optional tours across the island, but you can also plan your own tour by bike or kayak!

The Mohegan Bluffs are clay cliffs on the south end of the island, standing 150 feet high. Take in the view of the Atlantic Ocean from the top, or climb the 141 steps down to Corn Cove. Located on the Mohegan Bluffs stands the Southeast Lighthouse. The lighthouse became operational in 1875. The light was deactivated in 1990 and replaced by a nearby steel tower; the same year the lighthouse was added to the National Register of Historic Places. In 1993, the entire lighthouse was moved 300 feet from the cliffs, because the Mohegan Bluffs continue to erode each year. The Southeast Lighthouse was name a National Historic Landmark in 1997 for its aid in navigation and sophisticated architecture.

The North Lighthouse is a popular historic landmark on the island. The first was built in 1829, but was swept out to sea. The second was built in 1837, but was also damaged by the ocean. The current standing lighthouse was built in 1867, and was the 4th attempt. The light was deactivated in 1973 and placed on the National Register of Historic Places in 1974.

In 1896, the Women’s Christian Temperance Union installed a water fountain, known as “Rebecca at the Well.” Temperance movements thought it effective to install water fountains to provide alternatives to alcohol, and just as a reminder that there were healthier options than beer. The water pipes to the fountain eventually stopped working. The original Rebecca is very fragile, and was moved to a place out of the weather. A replica stands in the Rebecca Rotary since 2001.