From water comes life, and so goes the story with early civilizations. The success of early colonies was dependent upon one thing: how close were they to water?

Colonies and nations thrived based on their proximity to water – this determined their ability to trade with others, as well as their direct access to food and drink. Coastal land is prized highly, even to this day – after all, the most expensive property is always on the waterfront!

The U.S. had a huge advantage in development and expansion due to our amount of natural resources, namely the Mississippi River. To have a river that spans 2,300 miles—from the tip of Minnesota to the Gulf of Mexico—is a great head start to becoming a powerful nation! It’s like inheriting your first baseball team and already having the league’s best player. 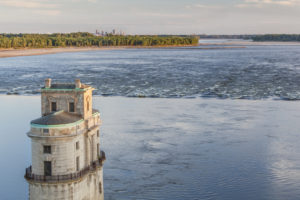 Historical water intake on the Mississippi River, with St. Louis in the background

In this post, we wanted to describe the role which the Mississippi River has played in our country’s development, as well as how it continues to provide for the people.

Interestingly, the Mississippi River has a few ‘Goldilocks’ details, things that were ‘just right’ to create favorable economic conditions during an important time in our country’s growth. Here are two:

Depth: Cargo ships can weigh an average of 500 metric tons. To support these, a body of water must have a depth of about 9 feet. The Mississippi maintains this depth throughout most of the river, especially through main channels. It’s also regularly dredged to keep this depth.

Conversely, other countries have long and wide rivers, but the depth was too shallow to support trade ships. They had to rely on other means for transporting, most being inefficient and expensive, like railways and pipelines.

Direction of flow: The Mississippi flows conveniently from north to south, so it can supply for 10 states! It also empties into the Gulf of Mexico, and can thus transport to other surrounding countries.

Large rivers in some places, like Brazil, flow into other countries as opposed to the coast. Or like in Russia, whose rivers flow to the Arctic (not much good can come from a ship in the Arctic!). These just make their rivers impractical for transport.

Throughout the 1800s, the Mississippi was the main artery of trade in the U.S. The challenges it posed spurred huge innovations in transportation methods. It’s on the Mississippi that we saw evolutions in cargo transport, from rafts to keelboats to the monumentally efficient steamboats.

Providing food for our country, and the world

Railways and highways opened trade routes in our country, and our dependence on the Mississippi lessened. Yet, even now, the Mississippi River continues as a main feeding source for both our country as well as the world. Here are a few statistics:

As you can see, we have much to be thankful for from the life that has sprang from the Mississippi River. Given it’s role in our country’s growth, we say visiting the Mississippi is like going back to the home you grew up in – it may no longer be an active part in your life, but it played a large and influential role in determining who you are today.

The Mississippi is one of our most popular destinations. People have read much about it, but the scope of the river can only be truly appreciated in person. Book a spot on one of our upcoming cruises – ships are filling up fast!